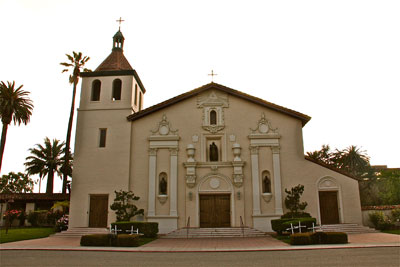 The church on the campus of Santa Clara University is what marks the site of the original Mission Santa Clara de Asis. Named after Saint Clare of Assisi, who was a contemporary of Saint Francis of Assisi, it is the first California mission to honor a female saint. Two locations were required by Spain as colonial outposts in the north during the eighteenth century. Mission San Francisco de Asis was selected to be near the entrance to the bay. Mission Santa Clara was located to the south.

The mission’s original site was near the Guadalupe River, the first Mass was held in 1777. The two assigned missionaries, Father de la Pena and Father Murgia, worked to improve the location and convert the local Ohlone Indians. However, the Guadalupe River flooded and a second temporary mission was established, blessed by Father Junipero Serra. In 1781, a permanent mission cornerstone was placed. Father Junipero Serra deposited a cross, religious artifacts, and coins within it, which can be viewed currently in the de Saisset Museum, which is also on the university’s grounds. This church was constructed from adobe, unlike the two wooden ones prior, and, in 1784, was again dedicated by Father Serra.

The third church lasted until 1818. It was known for the most baptisms and having the best wheat crop of all the missions. Unfortunately, an earthquake damaged it and another temporary church was built near what is currently Kenna Hall at Santa Clara University. A new mission compound was then built and finished in 1825.

In 1836, Mission Santa Clara was secularized, due to the desirability of its land. (In 1863, President Abraham Lincoln reversed this trend, and declared that all twenty-one missions in the mission chain become the property of the Catholic Church.)

In 1850, California became a state and the Jesuit order of priests took charge of Mission Santa Clara de Asis. Father John Nobili started a college there that became Santa Clara University. This is the only mission that is part of a university.

Sadly, the renovated mission church that had been upgraded over the years, burned in a fire in 1926. The rebuilding was a testament to its style in 1825. It was reopened in 1928 as the University chapel. The address of this eighth in the line of California missions is 500 El Camino Real, Santa Clara. It is open to the public and a reminder to us that Santa Clara was regarded as a desirable place to settle even many years ago.

Community
Author Melinda MyersPosted on June 20, 2018
Making a few changes in your garden care can yield great benefits. Less time and water wasted means more time for you to relax...

Community
Author Diane AndrewsPosted on December 12, 2019
Bob Buchser makes a big hit when he puts on his custom-made Santa Claus suit and arrives in a Lexus convertible at the Rotary...