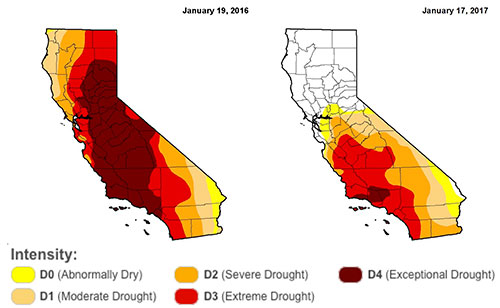 Recent storms brought heavy rains to Santa Clara these past few weeks and now we wonder: Is California’s multi-year drought coming to an end? How does Santa Clara stand?

In 2014, California Governor Jerry Brown declared a Drought State of Emergency. In response, Governor Brown and water boards around the state created goals to reduce water consumption. Through the years, Santa Clara County made strides to reduce water use and meet goals. Most recently, on June 14, 2016, the Santa Clara Valley Water District’s (SCVWD) Board of Directors decided on a 20 percent water use reduction for Santa Clara County–which is the same as the state’s goal.

As of November 2016, City of Santa Clara residents did a decent job at reducing water consumption by 21 percent in 2016–exceeding the reduction goal–according to the SCVWD Monthly Drought Response Status Report for Dec. 2016. Download the report from the SCVWD website: www.valleywater.org/WaterTracker.aspx

The City’s continued efforts to reduce water usage and the increased rainfall might just be enough to end the multi-year drought–at least locally.

So what are our odds of ridding Santa Clara and the rest of California of the drought?

According to the SCVWD’s Report, “The National Oceanic and Atmospheric Administration threeâ€month outlook on drought conditions indicate that drought is likely to persist or remain through the winter in many regions currently experiencing drought, including lower half of California and the Southwest. Geographic areas of Santa Clara County and in northern California shows improvement or ‘Drought removal likely’, where drought exists.”

However, don’t get too excited. According to the City of Santa Clara Water and Sewage website, the City is currently considered abnormally dry and not yet drought free. Read their drought update here: santaclaraca.gov/government/departments/water-sewer-utilities/drought-update

So far, water conservation rules remain in place. On Jan. 18, the State Water Board presented a staff proposal to extend emergency conservation regulations for public discussion. The staff will be bring a proposal to the Board for consideration in February after taking comments from the Jan. 18 public workshop into account.

So no, we aren’t out of the drought just yet; however, if residents and the City continue to conserve and save water and if the upcoming months bring enough rain, the end is in sight.

Traditional Santo Nino Festival at Our Lady of Peace