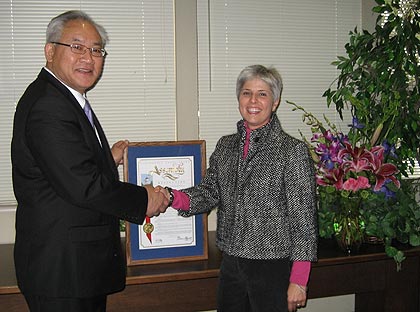 Fong named Kappeler-Hurley the California Legislature’s 22nd District Woman of the Year on March 18 and personally delivered a giant bouquet of flowers to her office at the Santa Clara Unified School District (SCUSD), where she has been Public Information Officer & Coordinator of Career Technical Education since 2004. She is also the coordinator of Girls Achieving in Non-Traditional Subjects (GAINS), a program that encourages girls to pursue careers in math and science.

“I looked for an educational leader doing cutting edge things, and Tabitha represents the best and brightest in our school system in Santa Clara,” says Fong. “It’s a great honor to know her, and our community is lucky to have a fighter for education in its midst.”

“I was pretty humbled when I found out [about the award],” says Kappeler-Hurley. “It caught me completely off guard. There are so many women who do amazing things in our community. We live in a place where people are blazing trails all the time.”

“It takes a whole team to do the work that is so important to the children in our community,” she adds.

After earning a Bachelor of Arts degree in English and a teaching certificate at San Jose State University (SJSU), Kappeler-Hurley, who was born and raised in the southern California town of Brawley, taught English and ESL four years at Wilcox High School before becoming its vice-principal for two years. Kappeler-Hurley then spent three years in Texas. Returning to California, she earned a Master of Business Administration degree and an administration credential from SJSU.

Kappeler-Hurley is a past president of Soroptimist International of Santa Clara, a business and professional women’s service organization committed to improving the lives of women and girls. She is captain for the fourth year of the SCUSD Wild Walkers. As part of the American Cancer Society’s Relay for Life, the team walks to raise public awareness and funds to prevent and fight cancer. Kappeler-Hurley is already signing up team members for this year’s event May 14 and 15.

Every year, California state legislators honor a woman in their district who serves the community in an exemplary way. Kappeler-Hurley, along with women from other districts statewide, was honored March 21 at the State Capitol building in Sacramento. At a special ceremony during the morning floor session, Fong presented her with a framed award certificate.

Past recipients of the 22nd District’s Woman of the Year Award are former Mountain View Mayor Margaret Abe-Koga in 2009 (the year the award began) and former Cupertino Mayor Dolly Sandoval in 2010. Fong rotates the award among the cities he represents, so in 2012 and 2013, women from San Jose and Sunnyvale will be honored, not necessarily in that order.

“Tabitha’s terrific,” says Kappeler-Hurley’s boss, Superintendent of Schools Steve Stavis. “It’s unfortunate that she has to wait 89 years to see if she’s the woman of the century.”

Community
Author Jonathan BlumPosted on November 28, 2012
It’s that time of year again. Kids come home with fevers, and coworkers come to work sick. The best way to protect yourself and...

Community
Author Carolyn SchukPosted on August 2, 2017
That Tae Yun Kim is not like any other tech CEO is an exponential understatement. And not just because she’s a woman or because...
SPONSORED