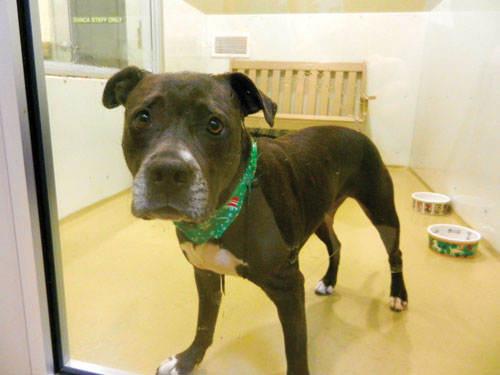 While most shelters are utilizing fall as a way to offer adoption specials on black and black and white cats, Silicon Valley Animal Control Authority is focusing on all of the animals in its care, which is why SVACA held its annual Walking in a Whisker Wonderland adoption event on November 3.

Potential adopters could name their own adoption fee, purchase tickets for a raffle sponsored by Friends of SVACA, and have their pets’ photo taken with Santa Claus for a $10 donation.

Overall the event was very successful in that 15 animals (13 felines and 2 dogs) found new homes, but dogs like Dottie, a six-year-old blue pit bull mix and Adele a nine-year-old orange longhaired cat are still waiting for their forever homes. Visit www.svaca.com for additional information and to see all of the animals currently up for adoption at the shelter (3370 Thomas Road in Santa Clara).

As a government-ran shelter, SVACA is bordering no-kill status with an 87 percent live release rate and a goal of hitting the 90 percent mark next year. “[With] dogs we’ve been at 90 percent for about the last three years,” said Executive Director Dan Soszynski. “With cats it’s been a bit of a challenge so every year we try to do something different. So between the fosters and saving the newborn kittens and the feral freedom program – really 30 percent of the cats that we get are feral so starting right with that, back in the day, the best you’re going to do is 70 percent because 30 percent of the cats are euthanized. So then 30 percent are newborn kittens so if there isn’t a program for them then [they will be euthanized]. Some of the national save rates are 50 percent or below because [other shelters] don’t really do those programs…So we’re striving for 90 percent as we go on through this fiscal year. I don’t know if we’ll hit 90 for the calendar year but in the high 80s is pretty good.”

Another way the shelter is coming up with creative ways to increase its live release rate is by teaming up with Petco in Santa Clara. “It’s turned into a great partnership for us and them,” said Shelter Manager Michael Limper. “We’ve adopted about nine or 10 kittens in the month or so that we’ve had them over there including two this weekend. It allows us to house more animals – we currently have eight kittens there full time which is the equivalent to two adoption rooms at SVACA. It also helps reach folks that might not know about us or the services that we provide. And Petco is able to reach out into the community and support our program and help find homes for homeless animals.”

Any minor between the ages of 13 and 17 can volunteer at SVACA and interact with the animals as long as they’re accompanied by a parent or guardian and first attend a volunteer orientation. “We’ve been doing this since January of this year and it’s proven to be a great help for us, as well as the kids,” said Limper. “I believe we’re one of the only shelters in the South Bay that lets minors get hands-on with the animals.”