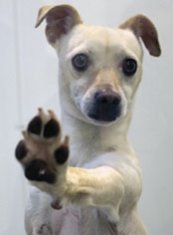 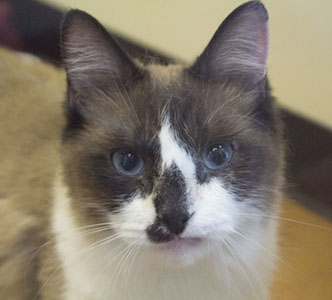 It was the start to a happy holiday season as Silicon Valley Animal Control Authority kicked off its winter adoption drive with Walking in a Whisker Wonderland, a name-your-own-adoption fee event on Nov. 9. In addition to the nearly 50 dogs and cats up for adoption, there was a raffle held by Friends of SVACA and, for a $10 donation, residents were able to get their pets’ photos taken with Santa.

As always, there were a couple of special animals available. Years ago, animals arriving any shelter in need of medical treatment would be euthanized. But, because of the support the organization receives, SVACA is able to provide medical attention to these animals and give them the chance they deserve. Two of the animals that have recently been treated, both whom are currently up for adoption, are Neo, the cat, and Pirate, the dog.

Eight-year-old Neo, a gray domestic shorthair, came into the shelter with an injury. The shelter speculates that Neo was hit by a car and his hip came out of its socket. Because of the difficulty involved in putting the hip back into place, the shelter performed a femoral head ostectomy (FHO) surgery, where, according to SVACA’s Registered Veterinary Technician Gina DeMartini, the top of the femur (femoral head) is shaved off in order for the body to heal itself. Neo, despite a long scar on his hind leg, can walk and jump, although he now has a slight limp.

Similarly, Pirate, a black and white five-year-old Parson Russell Terrier mix, was seen getting hit by car. Due to the hard work of SVACA’s animal control officers, Pirate was eventually coaxed from his hiding place and also recently received an FHO surgery. Pirate is now back to being a happy, fun-loving pup who is waiting for his forever home.

If interested, Neo is in the shelter’s expanded cat area, and Pirate is down the hall in the last room of the dog section, wearing a cone to protect his scar. While Neo and Pirate await their happy ending, 10 of their shelter mates (two dogs, two cats, and six kittens) found families at the Whisker Wonderland event.

To see all of the dogs and cats available for adoption, visit www.svaca.com.

Community
Author Cynthia ChengPosted on June 21, 2017
At Central Park Library during the June 10 Summer Reading Kickoff, children and adults in superhero costumes–from Wonder Woman to Guardians of the Galaxy...

Community
Author Cynthia ChengPosted on May 30, 2017
O n May 1, Emma Kaliterna, 98, styled three heads of hair at her salon and trimmed a tree before heading over to Central...
Community
Author Carolyn SchukPosted on November 20, 2013
That Santa Clara is notoriously deficient when it comes to entertainment venues is not something new. Fifty years ago City leaders had a plan...
SPONSORED