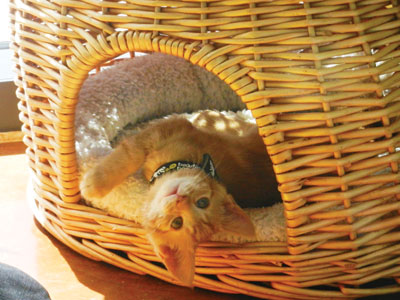 Approximately 20 people could be found waiting outside of Silicon Valley Animal Control Authority just before 11 a.m. on May 5. When the doors opened, there was no prize package or giveaway, but there were plenty of dogs and cats anxiously waiting behind glass doors for someone to adopt them.

Each year, SVACA prepares for kitten season and tries to combat the overflow of unwanted animals in Silicon Valley by holding an adopt-a-thon.

The idea for the event is simple. Encourage people to visit the shelter, showcase the animals, and waive the normal adoption fees to allow adopters to pay whatever they can afford.

“We are overflowing in dogs to our stray area because we have so many,” said Shelter Manager Michael Limper. “We probably have about 16 dogs and then five kittens and maybe 12 adult cats and a couple of bunnies as well [up for adoption today].”

Once spring hits, most people look to adopt kittens and many adult cats get overlooked. Even though SVACA only had five kittens available at the adopt-a-thon, they expect to have many more in the next few weeks.

“[Right now] we have one kitten litter and 35-40 in foster homes,” said Limper. “Our foster parents are taking care of them so we think that within three weeks will have 20-30 more kittens rolling through the shelter.”

Along with partners North Star Rescue, MickaCoo and MickaBoo there were plenty of animals to appeal to everyone’s preferences. North Star specializes in smaller animals like rats, mice and guinea pigs, while MickaCoo rescues and adopts pigeons and doves and MickaBoo finds homes for domestic birds. German Shepard Rescue, Toy Breed Rescue and Nor Cal Toy Breed Rescue were also part of the event, filling space at SVACA with many of their adoptable dogs. Our Pack, Inc., one of the organizations that helped rehabilitate and adopt out many of the Michael Vick dogs, Animal Health Center, and dog trainer Donna Johns were at the event as well.

Early indications showed the event had the potential to be extremely successful and by the end of the day 3 of SVACA’s dogs, including Cassidy, a three-legged Chihuahua who needed an amputation when she was brought to the shelter after being hit by a car and 9 SVACA cats and kittens had gone home with new families. The 12 adoptions cleared space for the next batch of animals to come through the ever-revolving shelter door.

For additional information on SVACA, its adoptable animals and various programs like foster parenting, visit www.SVACA.com.

Community
Author Suzy PaluzziPosted on November 30, 2011
Are you looking for a good read for the cold winter months ahead? Marjorie Bicknell Johnson’s book Jaguar Princess is just the one. Johnson...
SPONSORED