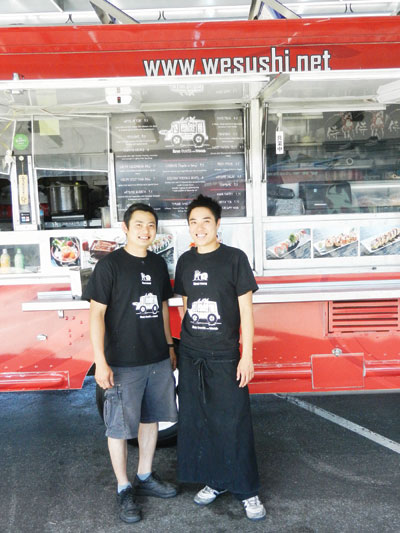 As the food truck revolution continues to take over not only the Bay Area, but the rest of the country, Santa Clara has a leg up on the competition – a fully-functional sushi restaurant on wheels.

“We enjoy being mobile and reachable,” said owner Thomas Wu. “Instead of being idled in one fixed location, we can reach out to sushi lovers anywhere in the Bay Area. [A] sushi truck is not new in LA, but it was completely new in the Bay Area when we first started.”

Wu, and his partner, Sofian Halim, started the We Sushi mobile concept in July of last year. “[We] were both working at a Japanese restaurant, and wanted to open one ourselves,” said Wu. “We were having an extremely difficult time deciding where in the Bay Area we should situate ourselves. We spent months looking for a location but none fit our needs. That was when the idea of making ourselves mobile came about.”

Wu and Halim operate the truck on a daily basis, but have part-time chefs who help out. The truck they use was created to accommodate their needs with refrigerators, a grill, stove and sushi station. “We built in the sushi case with a large clear window display so that our customers can see the entire production process – exactly what they experience when sitting at the sushi bar in a restaurant,” said Wu.

“For sushi, the main ingredient, of course, is rice,” said Wu of the process. “We use [an] authentic and traditional Japanese recipe to make rice vinegar and mix with Japanese rice in a wooden pot. It’s not an easy process as everything has to be precisely measured and timed.”

“In terms of fish,” continued Wu. “We purchase a whole fish from the market in South San Francisco most of the time, break it down and season it. The methods used are not always the same and it depends on [the] fish type. Another important ingredient is the tempura batter used for some of our menu items. We use [a] special recipe to make our batter so that the end product is more crispy.”

The menu consists of many items seen in traditional sushi restaurants, as well as a few vegetarian items and items exclusive to We Sushi. “Sofian loves [the] Lobster crunch,” said Wu. “He likes the crunchiness and the strong lobster taste without carbs [as there is] no rice in the roll. For me, my favorite is the Wheel of Fire. I like the overall texture and the chemical effect of the combination of seared albacore and jalapeno. I have to mention that both these items are We Sushi exclusives.”

Customers, have taken to the We Sushi idea, and Wu claims the most popular items are the Crispy California Roll and Sekiwake. “Many of our side items are also very popular, including [the] Sushi Taco and Takoyaki,” said Wu.

“We run almost seven days a week, lunch and dinner. We offer lunch service near office buildings from Santa Clara to the Peninsula, and dinner service greatly depends on when we are scheduled to attend food truck events. We [were] recently accepted into Off the Grid, and therefore will expand our service locations to include San Francisco.”

Visit www.wesushi.net for more information. Or, to find out where We Sushi will be at each day follow them on Twitter @we_sushi.