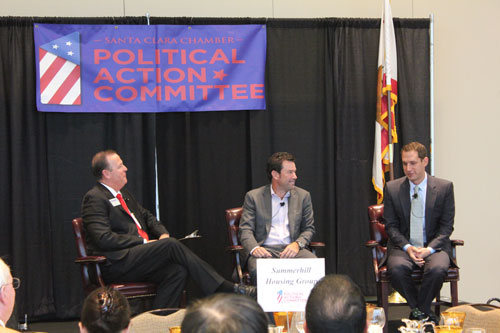 There’s plenty of excitement in the City of Santa Clara these days. And one of the most exciting prospects on the horizon is 2016’s Super Bowl L at the city’s new Levi’s Stadium.

Last week’s Santa Clara Chamber of Commerce PAC breakfast was an opportunity to hear about the economic opportunities presented by Super Bowl L directly from the people who will be putting on the show in 2016: Super Bowl Host Committee (www.sfsuperbowl.com) Chair Daniel Lurie – who also chaired the successful bid committee – and Committee President and CEO Keith Bruce.

Best known for founding the innovative philanthropy, Tipping Point Community (www.tippingpoint.org), Lurie kicked off the conversation by highlighting one way Super Bowl L will be distinctive – in addition to being the first-ever Super Bowl in Santa Clara.

It will be, he said, “the most most socially resposnsible Super Bowl ever.” One quarter of the money raised will go directly to 501(c)(3) non-profits for services that fight poverty, and groups working for sustainability and the environment. That adds up to $7.5 million for Bay Area non-profits to date – and Super Bowl L is two years away.

With last year’s Super Bowl bringing an estimated 150,000 visitors and $434 million in economic activity to New Orleans, Lurie said that he expects the economic benefit of the event to the Bay Area region to be huge. “It’s going to fill hotel rooms at a time when hotels aren’t usually busy.” And with those hotel guests, comes spending at restaurants and retail businesses and sales tax revenues for communities.

But the economic bounce doesn’t begin and end with the week of the game. The NFL begins setting up its operations months in advance, and many parts of the game day events must be organized and planned on location.

And that means significant business opportunities for not just direct suppliers but local subcontractors of every size as well. Taking a page from the upcoming New York-New Jersey Super Bowl committee’s book, the SFBA Host Committee will be launching a Business Connect website to give local, minority and woman-owned businesses access to Super Bowl-related business with workshops, networking, and help for negotiating the procurement process.

In fact, the SFBA Host Committee is going to be studying the MetLife Stadium Super Bowl event like a textbook because that event, like 2016, will be a regional event. And it will be a great opportunity to anticipate problems and identify opportunities that come with an event that spans an entire region.

“The entire world is going to be watching Super Bowl 50 [taking place] in Santa Clara,” said Lurie. And the city is already seeing some significant growth in business activity and interest as a result. “There are so many possibilities – it’s an exciting time to be here in Santa Clara.”

Volunteers – a few thousand of them – will also be needed, offering another avenue of community engagement. Sign-ups are already underway at sfsuperbowl.com.

“It will unite and invite the Bay Area and beyond like no other event ever has,” added Bruce.

Community
Author Cynthia ChengPosted on May 4, 2022
Parked in front of Northside Library on April 30 was a shiny DeLorean time machine, a vehicle with gull-wing doors. On this evening, the...

Community
Author Diane AndrewsPosted on December 4, 2013
It wasn’t Thanksgiving yet, but it was, nonetheless, a feast of thanks. The grateful parents of nine premature babies—born at just over two pounds,...
SPONSORED