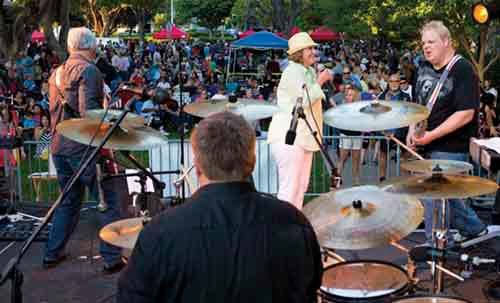 Popcorn was popping, wine was flowing, games were plentiful, and people were dancing up and down Jackson Street at Santa Clara’s Franklin Square Street Dance on August 3.

In addition to the fundraising booths guests had come to expect – soda and water from the Chamber of Commerce, kettle corn from the Buchser Music Association, and tri-tip sandwiches from the Santa Clara Police Activities League – there was a new sponsor for children’s games. King’s Way Community Church of San Jose to ran the face painting, spin art, dart throw and ring toss activities. Beer and wine was, of course, sold by the Santa Clara Sister Cities Association.

“We are raising funds by selling wine and beer, which helps our youth commission go abroad to Santa Clara’s two sister cities,” said SCSCA Vice President Raj Chahal. “This is one of our biggest fundraisers of the year.”

As always, the main event, sponsored by the city’s Cultural Advisory Commission, was the band. OTR, a first time Street Dance performer and the 2009 winner (and 2010 runner up) of KFOX’s Last Band Standing competition, kicked off their set with a cover of Stevie Ray Vaughn’s “This House is Rockin” and kept guests moving and shaking all night long. 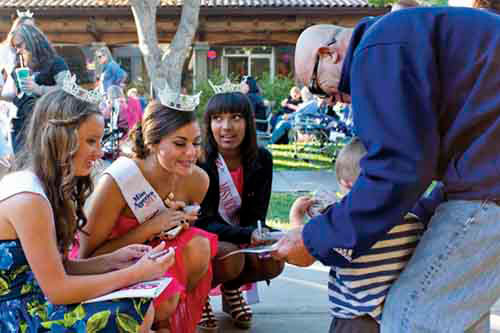 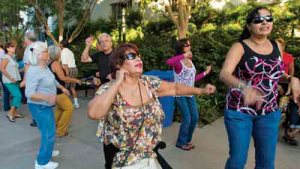 “I want to do as much as I possibly can this year,” said Crawford, who aspires to continue pageantry until she can compete in, and win, the Miss America title. “My first event was selling raffle tickets for the [Santa Clara] Lions Club cioppino feed. I told myself when I won that I wanted to get involved in the community as much as I could.”

The Street Dance is held every year at the midpoint of summer and is always a big hit with residents and friends of Santa Clara. For more information on OTR visit Mwww.otrband.net/.

Make Up is For Ever