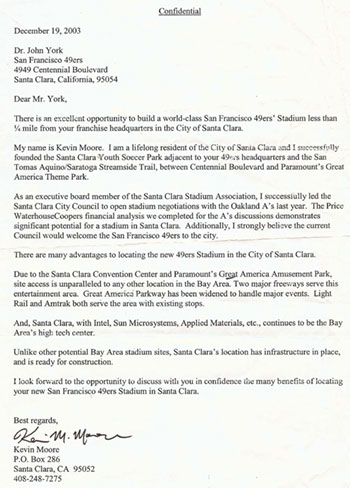 The five percent of inspiration came from a 2003 letter then Santa Clara Parks & Recreation Commissioner Kevin Moore – veteran of two failed attempts to bring a major league baseball stadium to Santa Clara – wrote 10 years ago almost to the day, asking 49ers owner Jed York to consider what Santa Clara had to offer as the site of the NFL team’s new stadium. After being elected to City Council in Nov. 2004, Moore persisted and finally got a meeting with San Francisco 49ers Executive Vice President Larry MacNeil.

“In my first meeting with Vice Mayor Kevin Moore, he focused on the infrastructure that was already in place around the Santa Clara site – light rail, heavy rail, and wide thoroughfares with connections to the major freeways,” said MacNeil.

“Kevin understood that transportation infrastructure is critical for a large venue, and he presented a compelling case that the Santa Clara site would provide great access for our fans throughout the Bay Area.”

“We were already working in Santa Clara,” former 49ers VP of Corporate Communications Lisa Lang told the WEEKLY in 2012. “Every day we would drive by this huge expanse of Great America overflow parking. Every day we would use the freeways and expressways.

“They had invested in infrastructure in Santa Clara to build for Silicon Valley [growth],” she continued, listing the city’s features: “The easy freeway access, parking, the fact that the area was separated from residential neighborhoods. The City Council had already designated an entertainment district.”

“Kevin recognized that area was set up for something great,” said Council Member Lisa Gillmor. “He took chances – that’s the kind of person he is. And it paid off for us.”

Prior Projects – And Failed Stadium Proposals – Guided the New Proposal

The city had tried for a stadium on city land before. First in 1989 with the San Francisco Giants, and again in 1998 with the Oakland As. Moore was a leader in both of these efforts. The Giants stadium project made it to a public vote where Santa Clara city residents approved the lease of the land for the stadium, but a countywide tax to fund the construction failed.

Although these projects didn’t succeed in their intended objectives, they provided necessary experience that came to fruition with the 49ers stadium. “The Giants project gave us insight into what had to be done to get a stadium,” former City Manager Don Von Raesfeld told the WEEKLY in 2012.

During Moore’s tenure on the Parks & Recreation Commission, the San Tomas Creek Trail project was launched and the youth soccer park was built. “We worked together to try to bring a major league soccer training facility to Santa Clara – that was the genesis of the youth soccer park,” said Gillmor.

“Kevin has always looked at a sports franchise to increase the visibility of Santa Clara, and capitalize on the fact that we used to be the youth sports capital of the world – for example, the Haines International Swim Center,” said Gillmor. “I remember him saying: We were renowned for that and he wanted to get the focus back on that, and keep people like Brandi Chastain in town.

“I think what prompted him [to write to the 49ers] was seeing the lost opportunity to bring the Giants to the city,” continued Gillmor. “Santa Clara residents wanted a stadium but the county said ‘no.’ He took it really to heart.”

The infrastructure that brought Levi’s Stadium to Santa Clara was in place because of city planning starting back in the late 1960s, with one of the great partnerships in city history – former Mayor Gary Gillmor and former City Manager Don Von Raesfeld.

The pair combined a clear vision with matchless synergy that shaped the trajectory of Santa Clara growth, and laid a solid city infrastructure for generations to come. Gary Gillmor said that the infrastructure was the city’s “holy trinity of success:” city-owned land, energy reliability through the city-owned electrical generation and distribution system, and strategic use of redevelopment funding to build infrastructure in advance of development.

“During that time there was a big push across the country on the part of cities to develop Convention Centers and tourism,” said Souza. “There was competition and we needed recreation, entertainment – things that would help Santa Clara become a draw for many types of activities.”

Souza faced considerable opposition for his goal of keeping the Northside door open for the future, instead of yielding to pressure for high-intensity private office development. As part of the Guadalupe Corridor Study Committee, Souza saw that the plans for that “golden triangle” were going to offer unprecedented opportunities for the region.

“I believe in keeping an open mind and taking advantage of opportunities,” said Souza. “I always like to say, ‘Why don’t we try it?’ It takes teamwork to bring it all together, and Kevin helped bring the team together by taking the initiative to get it started.”