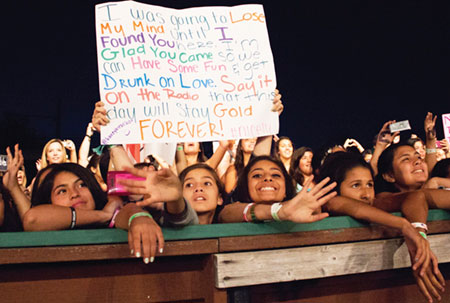 Radio station 99.7 [NOW!] made waves when it hosted its annual Summer Splash event at California’s Great America on August 2.

“A big part of our audience is from the South Bay,” said 99.7 [NOW!]’s Marketing Director Carlos Pedraza about the choice to hold the event at the theme park. “Great America has a great outdoor theater…[This event] is a recipe for success with all current artists on our playlist.”

The station put six of its hottest, chart-topping artists on stage. The show kicked off with Bonnie McKee whose pop anthem single “American Girl” has been gaining traction. The party progressed with “Problem (The Monster Remix)” singer Becky G., who hails from Inglewood, Calif. Then, Ariana Grande, best known for her role as Cat Valentine on hit Nickelodeon show “Victorious,” took the stage. Grande’s breakout single, “The Way,” featuring Mac Miller, is climbing the pop charts.

Once the girls finished their sets, the boys took control of Great America’s Redwood Amphitheater. Bay Area native hip-hop duo Kalin and Myles took a side trip from their current tour to play Summer Splash. Bostonian Sammy Adams followed with his energetic performance that got the near capacity crowd primed for the main event, the English-Irish boy band, The Wanted. 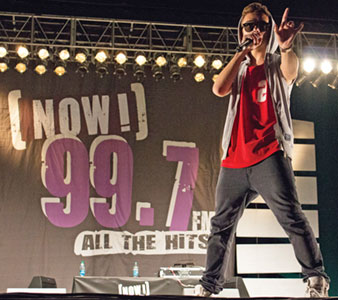 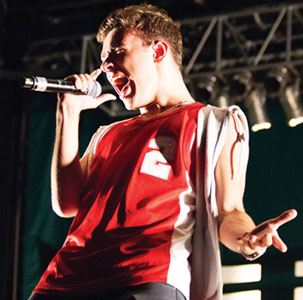 When The Wanted took the stage, the already enthusiastic pop fans took up their energy a notch, as they screamed, shouted and made heart symbols with their hands to welcome their favorite band. The Wanted didn’t disappoint and played all the songs that have made them famous including “Chasing the Sun” and “All Time Low.” The group closed the night with their chart-topping single, “Glad You Came.”

“[The event] is a great day of fun with a show at the end,” said 99.7 [NOW!]’s Assistant Program Director and Music Director “Jazzy” Jim Archer. “It’s something different than being in a stuffy box.”

99.7 [NOW!] held contests throughout the day that allowed fans to enter for a chance to attend a meet and greet with some of the artists. To keep things interesting, fans who wanted to meet Ariana Grande had to complete a photo scavenger hunt which included taking a photo of Charlie Brown, 99.7 [NOW!] DJ St. John and someone eating a funnel cake. Additionally, fans could enter for a chance to ride on a roller coaster with The Wanted.

“Great America is a great partner and we’re always looking for ways to make these shows better. So our first option [for future events] will always be here,” said Pedraza.

Visit http://997now.cbslocal.com/ to learn more about 99.7 [NOW!] and all of the acts at the event. Visit www.cagreatamerica.com for information on California’s Great America.