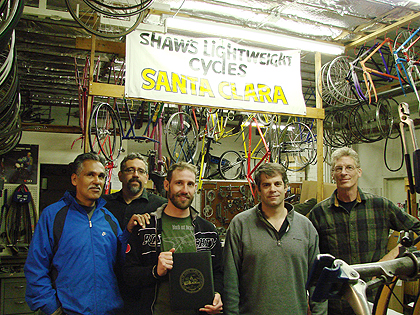 A plethora of cycling knowledge will be a little bit harder to find starting Friday. Shaw’s Lightweight Cycles in Santa Clara will be permanently closing its doors.

Owner Terry Shaw is no longer able to run the shop as he has been battling a heart infection for the last few years and is awaiting a transplant. As his heart continued to weaken, Shaw became less active within the store and he and his family have collectively made the decision to close the doors on their terms.

“This shop has a unique philosophy of fixing stuff instead of replacing it,” said Shaw’s son, Nathan. “It has a reputation of being able to fix anything and knowing how stuff works. It’s the bike shop that knows how to use their tools.”

Shaw’s Lightweight Cycles has been a favorite among both the average, leisurely cyclist and those who breathe the sport. “My dad is a former racer. [Current employee] Jerry is a former racer. We have had many accomplished athletes as employees and customers and the shop welcomes all types of riders – commuter, long distance and racing,” said Nathan Shaw.

When asked about why the store was closing opposed to the Shaws selling the business or Nathan taking the reins, Nathan Shaw made no hesitation before saying the shop was his dad’s passion and he felt he would be unable to serve the community in the same way. “The shop is really his personality. His knowledge. He’s the main wheel builder and the main fitter. We had the option to keep it in the family but I don’t think the shop could survive in this way without him. He is everything that makes the shop unique.”

“I think he’s ready to retire though,” continued Nathan Shaw. “I think he’s ready to spend more time with my mom. The hardest part will be that he will lose his meeting place where people can find him. So that will be a bit of a transition, but I think that with 35 years of having the doors open, he feels like it was a successful business.”

And, on March 26, while Terry Shaw was having a ventricular assist device placed into his body in an attempt to alleviate some of the stress on his heart, cyclists gathered at 45 Washington Street in Santa Clara to celebrate the way they always had at the store – with tortilla chips, beer and bowl of homemade guacamole. According to family friends, the Shaws own an avocado tree and whenever they would entertain guests, Terry’s wife, Conne, would make a bowl of guacamole. Admittance into the party would be granted to those bringing a bag of chips or beer, so it was fitting that a celebration commemorating 35 years of business would serve the three items that had been a staple in Shaw’s Lightweight Cycle celebrations.

Shaw’s Lightweight Cycles, which started in downtown San Jose in 1976, moved to Santa Clara in 1984 and has been a fixture among the cycling community ever since. The store, which was described as being “iconic” and “legendary” among cycling enthusiasts, will close its doors for the last time at the end of the month.

The Dish: Grab Some Willy’s…Seriously!

Business
Author Cynthia ChengPosted on December 23, 2020
Leigh Gass, who was raised in Texas, moved to Santa Clara’s Rivermark neighborhood with her family back in February. According to Gass, yard cards,...

Business
Author Melissa McKenziePosted on January 28, 2015
Back in the 1960s, Heart of the Valley’s Executive Director Glenda Cresap, a politically savvy teenager at the time, would pile her three very...
SPONSORED