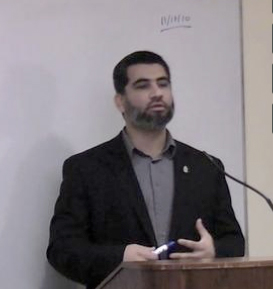 Something both would have recognized, however, is the radical submission to divine will encapsulated in the words “Muslim” and “Islam.” The words mean “submission” and share the same root as the Hebrew “shalom” and Arabic “salaam” – peace.

It is these shared roots of the world’s three leading monotheistic religions – Judaism, Christianity, and Islam – that the Muslim Community Center of the South Bay takes as its point of departure for its current bi-monthly “Inside Islam” series of talks.

The upcoming talk this month, “Legacies of Jesus (Peace be Upon Him)” shares Islam’s theological understanding of Jesus of Nazareth as a great prophet – shown in the Quran’s many references to Jesus’ life and teaching.

The speaker, theologian Ali Ataie, is president and founder of Muslim Interfaith Council. An engaging speaker who renders even the most arcane minutiae of medieval Christology understandable and relevant, Ataie is a Masters student at the Berkeley’s Graduate Theological Union, and the first Muslim seminarian specializing in Biblical studies in the seminary’s 143 year history.

“We need to transcend…[the] superficial fundamentalist mentality of some of our co-religionists, and truly try to understand each other,” Ataie told listeners at a talk sponsored by the UCLA Muslim Union last December. “The aspects of universality and love [in Judaism, Christianity and Islam] are absolutely foundational.”

“Legacies of Jesus (Peace be Upon Him)” is Sunday, April 17, 2011, from 3:00 p.m. to 5:00 p.m. at the Muslim Community Association’s banquet hall, 3003 Scott Blvd in Santa Clara. No reservations required, and refreshments will be served. For information, visit www.mcabayarea.org, email dian.alyan@mcabayarea.org, or call 408.727.7277 ext 402. Carolyn Schuk can be reached at cschuk@earthlink.net.