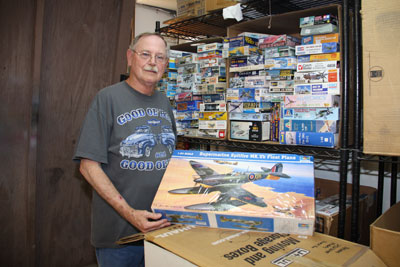 Dreams take wing and go where they will in Silicon Valley, where driveways are permanent parking spots for cars with fading finishes, and garages are buzzing and bursting with creative enterprises. A peek inside the Santa Clara garage of Steve and Anita Travis reveals their enthusiasm for building scale-model hotrods, airplanes, and Universal Pictures monsters such as Frankenstein from the classic horror movies.

“I could build a model a month until I die and have leftovers,” says Steve, who is retired.

And that’s just the garage. Inside their house, completed models are displayed in glass cases and on shelves across walls. There isn’t room enough to display all the more than 200 show awards Steve—and occasionally Anita—has won.

“I love building models. I love to go to hobby shops and handle them!” says Steve.

“It’s really special to have a hobby you can do and enjoy together with your spouse,” says Anita, who works for the city of Santa Clara. Steve introduced her to model making when they were married 25 years ago.

“We’re a good team,” agrees Steve, who got his first $1.59 scale model, a Grumman F9F Cougar Navy jet fighter (his dad was in the Navy), for his tenth birthday. Nowadays, a similar kit sells for around $20 online.

Since, as everyone knows, “love isn’t love until you give it away,” the couple has found a way to share their love of scale modeling with wounded warriors in the Bay Area’s veterans hospitals in San Francisco, Martinez, and Menlo Park. For the last twelve years, they have run the year-round Veteran’s Model Drive program of the Silicon Valley Scale Modelers (SVSM).

On behalf of SVSM, Steve and Anita deliver 25 model kits to each veterans hospital twice a year, donating 150 kits annually. Since they took over the project, they have purchased, stored in their home and garage, and delivered more than 4,300 kits to the three hospitals.

Because of hospital regulations, they must donate model kits with pieces that snap together rather than are glued. To raise money to buy the snap kits, they sell donated regular kits at model shows held throughout the year, raising $2,900 in 2011.

“It makes us feel good to know that we’re doing something for somebody who needs our help,” says Steve, who keeps a notebook of thank you letters from the hospital staffs.

“When we first pulled up to the VA hospitals twelve years ago [to drop off kits], we saw older vets in wheel chairs sunning themselves. Now we see young vets just off deployment, trying to get an arm or a leg to work,” he says.

Putting a scale model together takes patience, hand-eye coordination, a knowledge of tools and painting techniques, and artistic vision. It is a solitary pleasure and challenge, but once finished, the hobby becomes social for Anita and Steve, who meet up with other enthusiastic scale modelers at monthly SVSM meetings and at periodic shows with other clubs.

The mission of Silicon Valley Scale Modelers (SVSM), with about 40 active members, is to promote the hobby. Club programs cover all genres of scale modeling—automobiles, science-fiction and fantasy creatures, military vehicles, aircraft, and dioramas of battles.

Visit the SVSM website at www.svsm.org. To contribute to the SVSM Veteran’s Model Drive, contact Steve Travis at stevenanita50@yahoo.com.