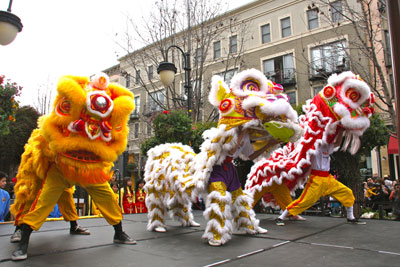 There may be a no longer existent civilization who noted that 2012 will be a year of demise, but that was certainly not the Chinese. According to the culture, this year, the year of the dragon, is a special one.

“Chinese New Year celebrations are important cultural events in the South Bay and San Jose,” said Santana Row public relations staffer, Trisha Clayton, in an email. “[This] is one way in which we can honor and thank our Chinese community and our other Asian communities for their wonderful influence and value in our lives.”

Tony Chen, host of “The Morning Concert” on KSJO FM 92.3 Sound of Hope radio, hosted the three-hour long party which included 28 performances showing off talented dancers, martial artists and musicians, among others.

“The event is incredibly vibrant, festive and family-friendly,” said Clayton, “not to mention a wonderful way for the Chinese and Asian community to gather in their local community to celebrate together.”

And celebrate they did. Held at the park on Santana Row, the performers were on stage, executing culture-specific dances (such as the show’s opening Lion Dance and Dragon Dance act) for crowds that pushed 10 and 15-people deep. (Those who weren’t taking in the entertainment were found up and down the Row taking advantage of the deals provided by the local businesses in part of the Chinese New Year celebration.)

Despite the South Bay’s celebration being in the rearview mirror, the Chinese and Asian community will continue to celebrate the year of the dragon for the months to come. That will take them all the way to the year of the snake on Feb. 10 2013 – yes, 2013, beyond the Mayans doomsday prediction of Dec. 21 later this year.

Community
Author Diane AndrewsPosted on September 21, 2011
If you were one of the Santa Clara Art & Wine Festival goers grumbling Sunday because you didn’t get a 31st festival keepsake wine...

Community
Author AdminPosted on March 13, 2013
The 1st Annual Pan-Asian Spelling Bee for 1st through 8th graders attracted some 300 students and their parents to the Spring Educational Expo March...
SPONSORED