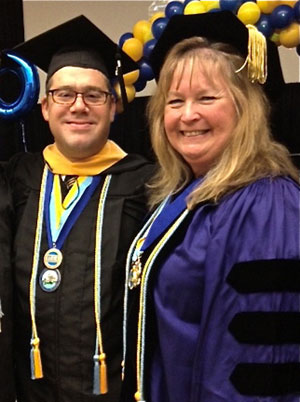 “Rod has been an outstanding student in the MPA program, bringing his wealth of knowledge and experience to the classroom,” said Dr. Frances Edwards, Director of the Public Administration program at SJSU. “His analysis of elections processes earned the prestigious Smith Award for the best research project of 2013.” Diridon was also inducted into Pi Alpha Alpha, the national public administration honors society which invites only the top students in each class.

Over the past three years, Diridon wrote more than 168,000 words, no small feat in light of his lifelong struggle with dyslexia. “Being dyslexic was tough, really frustrating, especially as a kid when school came so naturally to some of my friends,” said Diridon. “Part of wanting to graduate with honors was to show dyslexic kids that they’re smart, too. That they can overcome their learning disability and get good grades.”

Diridon earned his MPA while serving as Santa Clara’s City Clerk and becoming a father of twins. “It’s a shared accomplishment,” said Diridon, in acknowledgment of his wife Sabra, who received an MPA in 2011. “Without my wife’s support I would not have had the time to achieve at a high academic level. She’s the best, and I’m a very lucky man.”