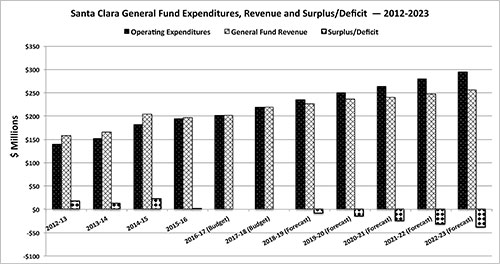 The good news in the 2017-18 Santa Clara city budget is that not only is it a balanced budget, 2016-2017 revenues are expected to come in $18 million higher than projected and the City will bulk up its reserve funds.

The bad news is that the long-term financial forecast for Santa Clara’s general fund–the money that pays for day-to-day services like libraries and police–is a steady procession of increasing deficits. That starts with an $8.5 million shortfall next year and grows to $38 million by 2023, according to the five-year forecast presented at the May 23 Santa Clara City Council meeting.

The deficit is driven largely by the mounting pension costs to pay off a $400 million unfunded pension liability. Between now and 2023 Santa Clara payments into the state’s public employee guaranteed benefits retirement fund, CalPERS, are predicted to grow by 78 percent to $73 million.

In the short term, Santa Clara’s income is keeping pace with its costs. Total revenue is forecast to be up 11 percent to $740 million next year, and general fund revenue is up 9 percent from the last year to $221 million.

The single largest source of Santa Clara’s income is charges for services, expected to grow 9 percent to $588 million. This includes charges for all services throughout the City from utility bills to recreation center class fees, and includes reimbursement for Levi’s Stadium-related work. Individual charge categories are reported under the specific departments and authorities.

Sales tax is Santa Clara’s single largest general fund revenue source, as well as the City’s most volatile. That revenue is expected to grow by 2 percent to $59 million, after deducting from last year’s numbers a one-time $7 million payment related to the redevelopment agency unwinding.

Property tax is expected to increase by 10 percent to $51 million, without accounting for new commercial and residential projects that will come online in 2017. Hotel tax (Transient Occupancy Tax) is expected to grow by 3 percent to $21 million.

Other revenue, including developer fees earmarked for park development, is expected to increase 33 percent to $28 million.

Santa Clara’s working capital reserve will start the year with slightly more than $50 million and that will grow to $55 million in the coming year. This fund was almost completely depleted by 2010, but grew over 2,000 percent in the last four years.

The working capital reserve is set at 25 percent of the general fund budget–the amount of money needed to run the City for 90 days. The intended use of the money is for emergencies such as natural disasters, not balancing the operating budget; although that’s how it was used in Santa Clara over the last two decades. (Some cities, such as Sunnyvale, have reserves for budget stabilization that are separate from emergency funds).

The City’s policy is to consider allocations into the working capital reserves as obligations. Transfers into that fund will appear on the expenses side of the ledger, and are considered as part of the City’s total expenses even though there may be no money to fund it.

But this goal has been largely aspirational since 2000. From 2002-03 through 2013-14 the working capital reserve was under the mandated level by between 10 percent and 93 percent.

No additional money is budgeted for the capital projects reserve this year or in the five-year plan.

Santa Clara’s biggest expenditure is utility costs, which include water, sewer and, the biggest, electric power generation and purchases. These costs are anticipated to increase next year by 14 percent to $341 million, driven by increases in assessments for San Jose/Santa Clara Regional Wastewater Facility’s capital projects, as well as increased higher prices and generation costs for electricity.

Santa Clara’s second largest expenditure category is compensation for the employees who deliver the City’s many services. Salaries and benefits will grow 8 percent to $228 million, driven by negotiated pay raises, added positions and a 15 percent jump in pension costs from $35 million to $41 million.

The proposed 2017-2018 Santa Clara City budget can be found at www.santaclaraca.gov/government/departments/finance.

We’d like to hear from you. To share your thoughts about this or other topics, please email your letter to scweekly@ix.netcom.com for publication. Please include your name and phone number with your submission–phone numbers will not be published. Letters to the Editor should be limited to 150 words.

City Politics
Author Alissa SorotenPosted on February 12, 2020February 12, 2020
Want some extra help navigating your Santa Clara ballot? Read on to learn about how we got here and what your vote means.  ...