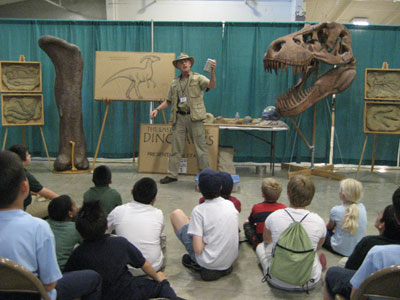 For more than 57 years, the enthusiastic rockhounds of the Santa Clara Valley Gem and Mineral Society (SCVGMS) have dedicated their energy to fostering a love of rocks and minerals in the local community.

The SCVGMS considers children to be the key to the future of earth sciences. About 1,500 children—second and fourth grade classes on school field trips and kids with their families—visited the 2012 gem and mineral show at the Santa Clara County Fairgrounds in San Jose April 20 through 22.

“We want to get kids interested in earth sciences,” says Frank Mullaney, show co-chair and club treasurer. “They’re enthusiastic; it’s great to see their interest and feel their energy.”

“Earth sciences,” explains Stanford University geophysicist Dr. Sander Hol, “are all the physical sciences that investigate the earth or its relationship to the universe. The core of it is geology.” SVGMS awards two to four annual scholarships of $1,000 to Bay Area college students studying earth sciences.

The annual show included a Kids Area with earth science activities that adults learned from, too. The program, developed by SCVGMS member June Harris, is tailored to second and fourth grade school curricula. Scouts earned their Geology Belt Loop and Geology pin. Kids panned for gold outside. Every child got a bag of rocks and a show patch.

SCVGMS sponsored the Dinosaur Guy, Richard Wade (www.sciencetalks.com), who talked about “The Last Days of the Dinosaurs.” Wade enlivened his presentations with dinosaur drawings, a meteorite, real fossils, and replica fossils of an impressive full-scale tyrannosaurus skull and a 7-foot brachiosaurus thigh bone he made from paper mache.

Former SCVGMS member Donna Kelley came from Colorado to demonstrate flint knapping, having taught herself to make arrow and spear heads from books. She makes them out of everything from a beer bottle bottom to obsidian, a volcanic glass stronger than steel.

The standard things one would expect to see at a gem and mineral show were there, too: fifty vendors selling beautiful rough and finished stones, jewelry and rock objects d’art, lapidary arts demonstrations, and rock and mineral displays. Bob Boblenz, “Mr. Rock and Mineral,” identified rock specimens. Seasoned collector Steve Yvaska lectured about antiquities and collectibles and evaluated items.

Not all vendors collect, polish, and make their own items. Some buy them for resale at the annual February gem and mineral show in Tucson, Arizon (the world’s largest show) or at the September show in Denver, Colorado (the second largest U.S. show).

Natalie Hill from Michigan timed a trip to Santa Clara to visit her sister, Emilie Sangetta, to coincide with the 57th SVGMS show, one of the larger shows in Northern California.

“When I walked in, the place was jumping. I’m overwhelmed by the immediate availability of stuff we can’t get at home. It’s amazing,” says Hill. The show really did rock!

The Santa Clara Valley Gem and Mineral Society (www.scvgms.org), with a membership of about 140, holds meetings in Los Gatos the fourth Tuesday of the month. The California Federation of Mineralogical Societies (www.cfmsinc.org) sponsors earth science seminars for adults.