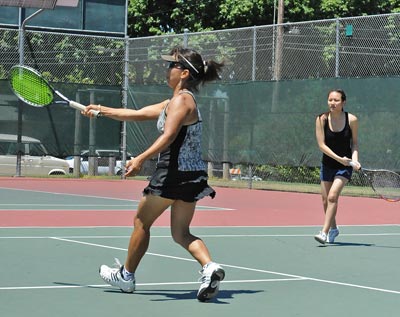 The Santa Clara Tennis Club held its annual “Pig Out” event at Henry Schmidt Park in Santa Clara. Normally, the idea of combining playing tennis and eating food doesn’t quite seem to go together, but the folks at the Santa Clara Tennis Club (SCTC) have it figured out. On Saturday, July 23, starting at 9am and continuing through 2:30pm, the “Pig Out” event got under way as members of the SCTC started playing doubles tennis. The “Pigging Out” part of the day started at lunchtime as the friendly tennis competition stopped and participants feasted on a full spread of food from Armadillo Willy’s Barbeque. After a hearty lunch, tennis play continued.

Membership in the SCTC buys quite a bit including mixers held once per month, tennis clinics taught by a tennis pro, a drop-in tennis clinic that works on drills and mechanics, currently being held on Wednesday nights from 7:30 until 10pm, and an eager group of friendly tennis players looking to play tennis.

Besides the camaraderie provided by playing with new and not-so-new friends, the SCTC does what it can to help the City’s Parks and Recreation Department, especially during these tough budgetary times. Examples include providing digital timers for the lights, volunteers washing the tennis courts at the Santa Clara Tennis Center once a week, and donating aluminum scoring posts.

According to club President, Marshall Madamba, “You’ll find people of all skill levels and ages in the SCTC. In addition to kids under 18, our members’ ages run from 18 – 84. That’s one of the nice things about the club is the wide range of ages and abilities with everyone coming together for a common purpose – whether it’s for monthly socials (held on the 3rd or 4th Saturday of the month) or the teaching clinics, or helping the City maintain the courts so everyone can enjoy them.”

The next mixer will be held over the weekend of August 19 – 21 and will focus on mixed doubles. The only requirement is that at least one player must be a club member. Membership in the SCTC is open to anyone interested in tennis. Residency in Santa Clara is not required and players of all levels are encouraged to find out more by visiting the Santa Clara Tennis Club’s website, www.sctennisclub.org or stopping by one of the drop-in clinics held at the Santa Clara Tennis Center, located behind the Library (2635 Homestead Road) and International Swim Center, near the intersection of Hayward Drive and the parking lot.