The City of Santa Clara appears to have figured out how to build a $1.02 billion public facility and get someone else to undertake virtually all the risk. Last week the City Council finally shared the details of the 49ers stadium agreement they have been hammering out for the last two and a half years.

“What makes this [project] unique… for the most part we’re not relying on any public assistance,” said Santa Clara Redevelopment attorney Tom Webber. “Facility revenues pay for the operating costs of the stadium and the debt costs.”

The financing deal with the 49ers unveiled at last week’s City Council study sessions – and likely to be approved by the time this goes to press – is that:

These terms are laid out in the 421-page draft Proposed Stadium Disposition and Development Agreement (DDA). (DDAs are contracts used to specify the terms of development projects on publicly owned property by private developers.)

The $850 million construction loan – from Goldman Sachs Bank; Merrill Lynch, Pierce, Fenner & Smith, Bank of America, N.A. and U.S. Bank National Association – will be made to a new entity, Stadium Financing Trust. The loan is expected to close in April 2012.

“The NFL is different from any other sports league – it’s a great thing to have the NFL as a creditor,” he said. “When we’re lending money how we’re getting paid back is [by] the stadium opening and revenue flowing in.

“This loan is structured so that there’s only a one percent charge for money that’s committed and not drawn,” Carey continued, adding that he expected only $650 million of $850 million to be actually drawn on for the construction.

The Stadium Authority, in turn, will pay back the loan from its revenues, including: naming rights, seat licenses – the right to buy season tickets for a certain seat in the stadium, called Stadium Builders Licenses (SBLs) – half of net non-NFL event revenue, and ticket surcharges (yet-to-be-established for NFL events, and $4 per ticket for non-NFL events). Stadium revenues during construction will be used to prepay the loan and when the debt is repaid, the SA will retain the revenue for ongoing expenses.

“Rent payment would service that loan,” 49ers Chief Financial Officer Larry MacNiel said at the Dec. 6 study session. “It’s all inside the StadCo-SA relationship, which is ultimately supported by rent. The rent will not be set until the stadium is operational. If our projections are wrong, the SA can put those operating costs back on StadCo.”

The deal is structured to pay the stadium city rents and operating and maintenance expenses (O&M) first. Debt service then is paid and any additional revenues return to the SA and StadCo.

Much of the deal’s complexity results from the requirements of Measure J – the 2010 Santa Clara ballot initiative approving the stadium project. It specified that stadium financing must be structured in such a way as to absolutely shield Santa Clara’s general and enterprise funds from any liability, and protect public land ownership.

And if things go sour? 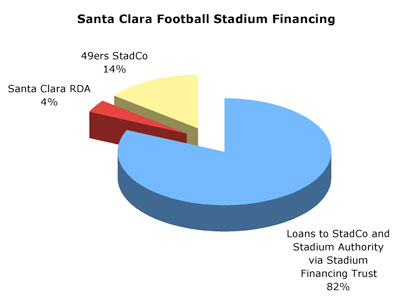 “The city’s rights under the ground lease are protected,” said Webber. “Whoever would step into stadium authority is still obligated to pay rent – if they don’t pay they would be evicted. An exigency we really haven’t talked about [is that] the NFL will step in and help sort things out. Any new entity that comes in will have to live up to the [agreement’s] conditions.”

“The underlying asset behind this is the 49ers team itself,” said Stanford Business School professor George Foster, co-author of “The Business of Sports.” Foster teaches sports business management and has conducted NFL-Stanford executive education workshops. “The underlying strength of the NFL should not be underestimated. They can always sell a partial equity in that. In my opinion, the numbers being presented here are conservative.”

The total of these sources, $1.04 billion is actually slightly higher than the estimated construction cost of the stadium, $1.02 billion.