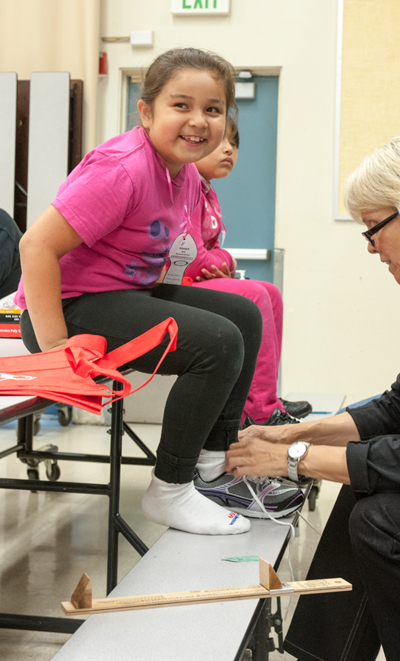 Even though the start time wasn’t until 10 a.m., by 9:20, the line stretched down and around the front of the building. No, this wasn’t for the latest smart phone where people camp out for days just to have the latest “thing.” This was for something much more worthwhile and needed.

Steps for Success is one of the Rotary’s many yearly programs that make a difference in people’s lives right here at home. Even before the event started, event organizers estimated that they would be fitting some 300 pairs of shoes at Scott Lane in a little over three hours, and about the same number at George Mayne. The weekend was the second for the program, which was at Briarwood and Montague Elementary Schools in Santa Clara on Oct. 5.

After students registered, they were guided to one of several shoe stations. There, a Rotary member determined the correct shoe size. But before they tried on the new shoes, they also received a new pair of socks as well. After getting their new footwear, students got to take their choice a brand new book with the help of Santa Clara Library Literacy Volunteers.

Once students chose their books, stickers were affixed to each book declaring it that child’s personal property – giving students a sense of ownership to encourage them to read. With books firmly in hand, students also received a custom-made bookmark, and some made a bookmark of their own.

As in the past, the books were paid for through donations and selected by Santa Clara Library staff members. “Scott Lane is one of the biggest sites and is a feeder school as students from other schools come here,” said Shanti Bhaskaran, the Literacy Programs Supervisor at the Santa Clara Library. “The other school site for today is George Mayne Elementary in Alviso. This is a great way to encourage reading and to teach kids about the library.”

Bhaskaran was there with the Charity Trajico, the Library’s Volunteer Coordinator and a group of volunteers from the library along with students from Wilcox and Santa Clara High Schools’ Interact Program, Rotary’s high school program.

Although the events of the day might seem small, for these children and their parents it was unforgettable. It was a day that many hope will encourage these children on a path of positive engagement with school and reading. Judging by the smile on every face, it’s easy to say the event was another success.

Santa Clara Rotary launched Steps for Success in 2000, making this the 13th annual event. Over the years, the service club has fitted children with about 8,000 pairs of shoes, according to Rotary officials. For information about Santa Clara Rotary, visit santaclararotary.org.

Community
Author Cynthia ChengPosted on June 27, 2018
For the last three years, Wilcox High School student Visala Tallavarjula,16, has been planting with different soils to study which soils help yield the...

Community
Author Cynthia ChengPosted on September 2, 2015
“My mom gave me a geode, which is an oval shaped rock with crystal growing on the inside,” says Santa Clara author and Santa...
SPONSORED