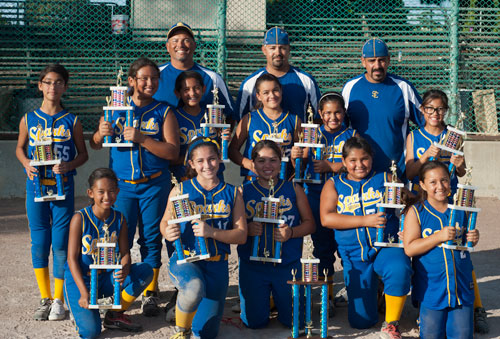 The players might be young – ranging in age from a little less than 8 to a little less than 14, but once they gripped their bats, strode into the batter’s box, stared out at the pitcher in anticipation of the next ball that would be grooved in at them, or put on their gloves and took their positions on the field, any pretense or assumption about how they’re just “young girls” evaporated immediately. It’s not just their enthusiasm, nor their attitude and desire to not just win, but letting everyone in the stands or passing by know just how good they are, became abundantly clear with just one glance at the seriousness of their expressions. Their eyes really said it all. Standing in the batter’s box or tracking down a fly or ground ball, their eyes tell you everything you might need to know. These girls were there to compete.

According to Officer Bill Davis, the Executive Director for PAL in the city of Santa Clara, “It’s been over three years since a Santa Clara team won and I’m excited to report that’s just what happened” as the Santa Clara Sparks 10U (10 and under) team took the championship by defeating the East Bay Impact in the final one-game championship by a score of 11-9. The 10U team wasn’t the only Santa Clara team that finished among the top teams as the 8U (eight and under) team finished in second place for the entire tournament.

The Sparks 10U team played hard and it showed. Their pitcher, Jasmine Lopez, had a combined record during the tournament of 5 wins and 1 loss including pitching one shutout and one perfect game (no hits, no walks and no runs scored) over the weekend. In the last round of the championship, their opponent was the East Bay Impact. Right from the first pitch, the Impact showed they would be a force to be reckoned with. The players on both teams played aggressive baseball – they stole bases, did what they could to force the other team to make a mistake, hit the ball well, pitched well, and played as a team well too.

Softball isn’t the only activity in which the Santa Clara PAL participates. They also are involved in BMX (bicycle moto-cross for boys and girls), bowling, boxing, fishing, Judo, Police Explorers, Shop with a P.A.L., soccer, wrestling, as well as hosting an annual golf tournament (scheduled for August 17). For more information on the Santa Clara PAL, please visit their website, santaclarapal.org.