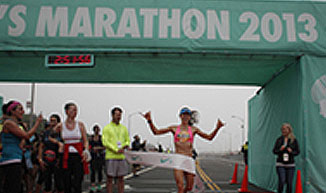 Santa Clara High School 2010 graduate Emily Gordon won the 2013 Nike Women’s Marathon in San Francisco on Oct. 20. Gordon, a fourth-year biochemistry major at UCLA, crossed the finish line with a time of 2:51:44. About 30,000 ran in the 10th anniversary 26.2-mile race, which benefited the Leukemia & Lymphoma Society. The Nike marathon is the health organization’s largest single fundraiser.

“It’s great to win my first marathon!” Gordon said at the end of the race. She decided to compete because several of her UCLA triathlon teammates had already signed up, she told the UCLA Daily Bruin (dailybruin.com). Gordon’s finish time is less than nine minutes away from making her eligible for the 2016 U.S. Olympic Trials.

Santa Clara WEEKLY bookkeeper Barbette Barlow was also among the competitors on Oct. 20, finishing in the top third. “It was an amazing experience,” Barlow said. “The energy of the crowd was like nothing I’ve seen before.” Find photos and video at nikeinc.com/news/nike-celebrates-the-strength-and-passion-of-women-athletes-around-the-world-at-the-10th-anniversary-nike-women-s-marathon-in-san-francisco.

Community
Author Carolyn SchukPosted on June 4, 2014
On May 17, parks in the south of Pruneridge area of Santa Clara got a lot of personal attention. First was the long-awaited opening...