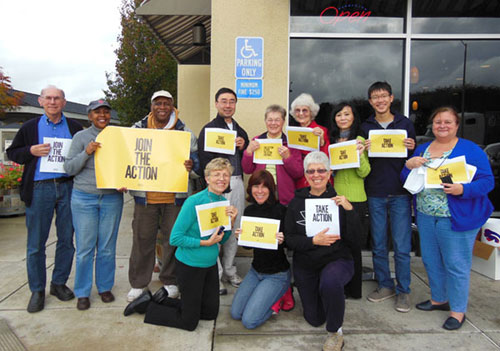 After Obama won the election last November, there was a lot of talk in polito-sphere about the campaign’s “ground game.” What made that “ground game” so effective was that it was already in place long before the campaign started – as Romney’s team discovered to their regret.

That team is still in place today – a loose network of grassroots activists who continue to organize phone banks and letter-writing and social media campaigns to marshal public opinion and legislative votes for a progressive political agenda. The key to their success is that they work year-round, not just before elections.

One of those activists is Santa Clara resident Galen Swain, who on any given weekend or evening can be found hosting a letter-to-the-editor campaign, phone bank, or party to watch public events like the inauguration.

A software engineer, part time DJ, and indefatigable organizer, Swain began working for Obama in 2008 with Santa Clara neighborhood team leaders such as Ann Krause and Marina Salvatore and hasn’t stopped since. Now the West Valley for Change Democratic Club (www.facebook.com/WV4CDC) is a well-oiled machine that takes on community service projects as well as political action.

A few weeks after last November’s election, the team gathered at Bellano Coffee in Santa Clara for a phone bank – in these days of cell phones, Internet calling, and social media “phone” banks are bring-your-own-device affairs.

They were calling registered Democrats in a Southern California district represented by a Republican, asking them to call and write their congressman to support the “fiscal cliff” bill. In the course of a few hours, the 18 volunteers made 600 calls

“More people came out for this phone bank than for the campaign,” observed Santa Clara resident Madalyn Perrine. “Now that Obama has been re-elected we want to see his program enacted.”

“It’s important to get constituents to call their representatives,” Swain explains. “Those calls get registered and members of congress know voters are paying attention.”

For volunteers, working together is empowering, he says. “By having their shoulder to the stone, they’re moving it – they’re making a difference. When they go home with the feeling ‘I made a difference,’ that is a very powerful motivator. We all want that feeling. Everyone wants to feel that we make a difference in a positive way.”

On Feb. 12, West Valley for Change got together at the Round Table Pizza on Stevens Creek Blvd to watch President Obama’s State of the Union speech. And no doubt, while they were enjoying pizza and beer they were also planning some grassroots action to muster support for Obama’s immigration reform and gun control proposals.

City Politics
Author Carolyn SchukPosted on August 4, 2022
Back in 2017, Santa Clara’s finance department forecast that by 2023 the City would face a cumulative shortfall of $600 million for meeting its...
SPONSORED