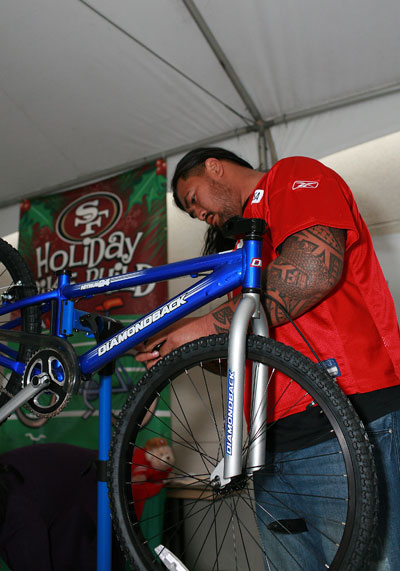 Rather than darting spirals aiming for touchdowns, vaulting down the sidelines, gaining first downs or tackling their opposition vying for gridiron supremacy, several 49ers played Santa’s helper recently, assembling 49 boys and 49 girls bicycles for underprivileged children at the team’s headquarters and training facility in Santa Clara.

Happy to be spreading holiday cheer in the community, several players were busy spending their regularly scheduled day off serving as elf toymakers.

49ers Guard Mike Iupati, Long snapper Brian Jennings, Guard Daniel Kilgore and Punter Andy Lee were among the many who contributed their time and bike building skills to the great event. Participating players shared an equal amount of laughs and fun in helping others who need it.

UnitedHealthCare employees and members of the UnitedHealthCare Pro Cycling Team joined the 49ers players and staff assemble the bikes at the 49ers’ Marie P. DeBartolo Trainign Center and Headquarters.

The bikes were delivered the following day to students at Costano Elementary School, which shares the 49ers Academy’s campus in East Palo Alto. In addition to being gifted the bicycles, the East Palo Alto children were taught bicycle safety by UnitedHealthCare and Stanford Hospitals & Clinics volunteers at the Family Health and Well-being Fair.

Turning Wheels for Kids, the organization responsible for building and donating over 14,000 bikes out during the Holidays has been donating bikes to in-need children for the last seven years.

Turning Wheels for Kids is part of UnitedHealthCare’s commitment to help people live healthier lives in the local community. The mission coincides with the 49ers PLAY 60 campaign, which encourages kids to “Get out and play, 60 minutes a day.”

Turning Wheels for Kids assembles and donates bikes to more than 20 non-profit organizations on the Bay Area.

Visit www.turningwheelsforkids.org for additional information on Turning Wheels For Kids.

The 49ers Foundation, the non-profit community funding extension of the San Francisco 49ers, now in its 19th year, supports development programs for underserved youth that keep them “Safe, On Track and In School.” A significant portion of the foundation’s funding goes toward family violence prevention programs and activities that teach youth leadership and respect.

Through the leadership of 49ers team owners Denise and John York, the 49ers Foundation has donated more than $10 million over the last eight years to non-profits throughout the San Francisco Bay Area.

Visit http://www.49ersfoundation.com/ for more information on the 49ers Foundation.

49ers Stadium Gets NFL Blessing in Form of $200 Million