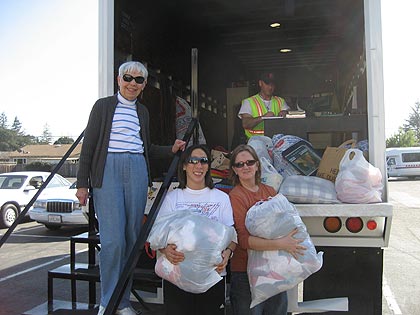 The Salvation Army is a faith-based international organization founded in the U.S. in 1865. It offers social services worldwide with no spiritual strings attached. Yet despite its long history of outreach, the Salvation Army has a bit of Hollywood mystique surrounding it. Indeed, Clark Gable, Cary Grant, Frank Sinatra, Marlon Brando, Mae West, and Joan Crawford all played Army characters.

Many a Christmas movie features a crowded sidewalk scene with a Salvation Army bell ringer and a red kettle. But just how much money ends up in those kettles? What exactly is it used for? What does the Salvation Army do the rest of the year? The reality is by far more impressive than the movies.

In Silicon Valley alone, the Salvation Army collected a record high of over $300,000 in Red Kettle donations in 2010. It uses ninety cents of every one of those dollars directly on local social services, beating the national average (eighty-three cents) in efficiency by seven cents.

“I would not underestimate the power of any gift, however small,” says Angela Kelly, Community Relations & Development Director in Silicon Valley.

The Salvation Army makes its dollar go far by using volunteers, paying low salaries to its Army staff members, receiving gifts in kind (such as food and used household items), and recycling everything.

“We’re one of the largest recyclers in the county. We don’t only recycle goods, we recycle people. We give people a fresh start,” says Major Richard G. Larson, Santa Clara County Coordinator. “[During the City’s annual cleanup campaign], consider calling the Salvation Army rather than placing usable items curbside. Use the things to help someone.”

Salvation Army thrift store sales support adult rehabilitation centers (ARCs) such as a 100-bed center in San Jose. This center for men fighting substance abuse offers residential housing, work as therapy, and group and individual therapy. In 2010, 368 men were admitted to the six-month program. Of those, 65 percent were on probation or parole; 106 graduated. The program has a 33% success rate, compared with a 25% national average.

Peter Benjamin Dew is a February 9th graduate of the ARC program. “It gave me the opportunity to change my life,” he says. “It gave me the chance to be my true self. When you use drugs, you do things you wouldn’t normally do….It is awesome. I got back in touch with my family and renewed our relationship.”

The Salvation Army began its disaster relief work in 1906, assisting the victims of the San Francisco earthquake. On March 10, 2011, the Salvation Army was first in line to aid earthquake and tsunami survivors in Japan. March 11, Army volunteers provided food, drinks, and emotional support for tsunami evacuees and rescue personnel along the Santa Cruz County coast.

“In an emergency, we’re the first there and last to leave,” says Larson. “One hundred percent of every dollar donated for emergency relief is used for that emergency. Nothing is deducted for overhead, and designated money is never diverted for other emergencies or purposes.”

“The Army and their efficiency and the hands on way they express their faith impresses me,” says Kelly.

Used clothing and household items can be donated at the Santa Clara Corps Community Center, 3090 Homestead Road, (408) 247-4588, and at 3536 Monroe Street. The Santa Clara thrift store is at 1494 Halford, near El Camino Real and Lawrence Expressway. For general information, call (408) 282-1165 or check online: www.salvationarmysiliconvalley.net.

“The need is year round,” Larson points out. “It doesn’t stop at Christmas.”

To make a cash donation to the Salvation Army’s Japan relief effort:

Business Community
Author Press ReleasePosted on January 9, 2022January 10, 2022
Westfield Valley Fair has announced that its new controlled parking plan will go into effect on February 8, 2022. The plan keeps the first two hours of...

Community
Author Diane AndrewsPosted on September 24, 2014
It was standing-room only for free popcorn, cider and a movie at the annual Harris-Lass Museum movie night Sept. 12. Each of the three...