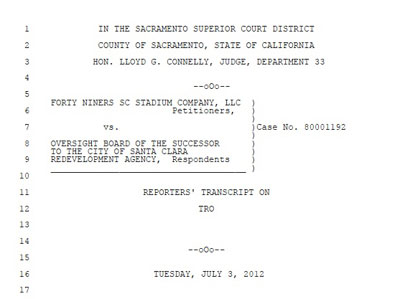 It looks like the County isn’t going to be buttering its bread with Santa Clara’s $30 million.

Last month the Santa Clara Redevelopment Successor Agency Oversight Board voted 4-3 on an off-agenda motion – described in the hearing as the Putris Motion, after its author, County Tax-Collector George Putris – nullifying the former RDA’s contract with the San Francisco 49ers for $30 million in stadium construction funding. On June 27, the 49ers filed suit in Sacramento Superior Court to block the Oversight Board’s action.

The Sacramento judge didn’t buy Santa Clara County’s arguments for taking the money, starting with the notion that the Santa Clara Stadium Authority was a “money washing”operation designed to skirt state law.

“When you look at the these contracts [the stadium term Sheet and Measure J],” Judge Connelly said, “both in a general context… predate significantly the governor’s call for the elimination of the Redevelopment Agency…You see that there’s something at work here more than some effort to abrogate the elimination of the Redevelopment Agencies in terms of preserving their [the RDA’s] money and their ability to spend it.”

The judge also noted several times that the oversight board’s actions possibly violated California’s open meetings law, the Brown Act. An agenda item that’s described as a “brief description and overview of Stadium Agreements,” is not the same thing, Connelly said, as a motion to terminate the agreements.

“There is some common interest or common sense that comes to bear in these types of contracts of high interest to the community because they involve an entity in the community…that is notable, and the level of interest is high…An overview is different from as determination.”

Indeed, Connelly found more than a few things contrary to proper procedure at the June 22 Oversight Board meeting, starting with a failure to take attendance.

“I can’t tell for example who was there and who wasn’t there,” said the judge. “I don’t have a list of the attendees. I know, for example, Mr. Singh was there. He was identified, and this is Exhibit A in the Declaration of Jonathan Bass, as an alternate representative from the Santa Clara Board of Supervisors. But he was actually, according to the pleadings, there representing the Santa Clara County Fire Department because Mr. Jarvis wasn’t there.

“And then I had a Chang who was there, representing Mr. or Ms. Plough, I assume from the Santa Clara County Board of Education. I can’t tell if those people were designated by their appointing authorities…or whether Mr. or Ms. Plough called up Mr. or Ms. Chang and said, ‘Come on down and take my place. I have a headache.’ …It’s impossible to sort that out.”

Further, Connelly noted, “the rather conclusionary manner in which the issue was discussed by the Oversight Board, the decision involving tens of millions of dollars, based on oral and quick decisions as I gathered from the manner in which it was presented here.” This was, the Judge said, contrary to deliberative process envisaged by state law – one that duly considered community impact and value.

“It doesn’t appear to this Court that there is evidence to, at this point, to conclude that that was not done in a fashion [that was] somewhat arbitrary,” he continued. “If the Board did not understand that, as it appears to me, these are enforceable contracts, and StadCo is not going to disappear, and …this could turn into the proverbial oil commercial where you are paying the amount of contract, plus interest, plus potential damages. That’s an evaluation to be undertaken with care, and there’s no evidence here that that’s been done.”

Connelly explained that the restraining order was based on “a strong likelihood of the petitioner prevailing in this case, particularly on their Brown Act violation and contract termination claims. I add those two things together, the Brown Act and … my analysis here on the contracts of the law, and I think that they’re [the SF 49ers] prevailing.”