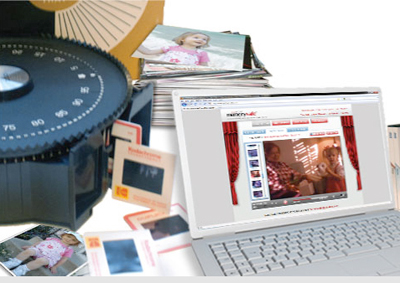 How many videotapes, 35mm slides, and photos occupy space in your house? Chances are, more than a few. You might even have 16mm film reels collecting dust in the attic.

You’re not alone. Back in the 1990s, microprocessor engineer and founder of Santa Clara-based YesVideo (www.yesvideo.com) Sai-Wai Fu also had an ever-growing home video collection.

“I was like most people. I had a lot of media – videotape. And I know the solution is DVDs.” He also knew that if he had a problem, probably other people did, too. “That,” he says, “is a business opportunity.”

A semiconductor engineer by training, Fu was VP of engineering and product planning at C-Cube Microsystems, a pioneering startup that won an Emmy award for its digital TV technology.

All it takes is dropping off those old pictures and videos at the store’s photo department. Prices start at $25 for video transfers.

“Most people are familiar with taking photos to a photo center,” says Fu. By operating in a familiar way through established retailers, YesVideo keeps its sales and marketing costs low – freeing profits for business growth. This year the company introduced a memory-card-to-Blu-ray transfer service, making it simple to watch videos filmed in HD, in HD.

But DVDs still stack up. They can be lost or damaged. And, inevitably, they’ll be obsolete. As you might imagine, Fu already has the answer. Starting at $10/year, YesVideo’s MemorySafe service will store your digital files for you, letting you view them from any Internet-connected device.

“More and more personal video is being recorded,” he explains. “And people want [to view] it on their new gadgets – smartphones, tablets, TVs. People will want content in the cloud. * [They’re starting to say,] I no longer want to be an IT manager in my own house.”

Plenty of opportunity lies ahead, says Fu. “Telcos, cable TV companies, ISPs [Internet service providers] are all competing for the services operating through the network. The next thing is delivering personal content over TV, personal TV channels. We have the personal content, and we can deliver to the network, to the TV.

“We [also] have tools to easily convert [media] to the format you need,” he continues, “allowing service providers to add personal media to telecom service packages.”

Its Santa Clara address has played an important role in YesVideo’s success. The company moved here in 1999. “Santa Clara had the best property available and it was not that far from San Jose. After we moved we realized another huge benefit. Santa Clara has the world’s best electric supply.”

“Because we manufacture locally in Santa Clara, we are very sensitive to power reliability,” he continues. “In Santa Clara we don’t have to invest as much in backup power generators.” And that alone, Fu reports, is a significant savings for the company. Savings that can be invested in new ways to preserve life’s special memories.

*”Cloud computing” describes computer resources – applications, data storage – that are provided online (“hosted”) instead of on your computer. The email service Yahoo! Mail is one familiar example. Cloud computing operates like a utility: It doesn’t matter which reservoir your tap water came from this morning – only that you opened the tap and got clean water. By the same token, “desktop computing” is like digging your own well. For cloud computing – or water systems – to work, you need highly responsive, secure, and reliable infrastructure.

When she’s not looking for slides from her 1986 Yosemite trip, Carolyn Schuk can be reached at cschuk@earthlink.net.