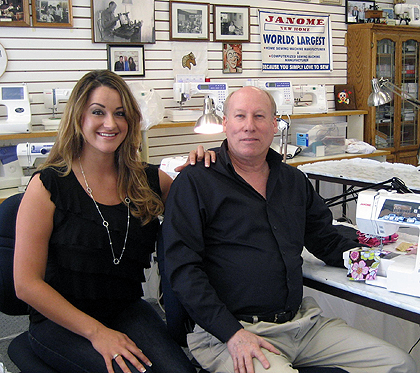 Arlene Gresham made diapers for her first-born child on a White treadle sewing machine she bought used for $5. But times have changed, and nowadays she sews multi-layered tote bags for her home business with a Ray’s Special sewing machine—a heavy-duty Janome that Ken Gresham (not related), owner of Ray’s Sewing Machine Center, San Jose, redesigned to meet the special needs of customers such as Arlene.

Gresham’s late father, Ray Gresham, started the independent, family business in the late 1940s in his Santa Clara home, where Ken, who was born in Santa Clara and graduated from Santa Clara High School, still lives. Today, after 64 years in business, Ray’s Sewing Machine Center is the top single store distributor of Janome sewing machines in the U.S. and ships machines, parts, and software accessories world-wide.

Gresham and his dad are the only father and son inducted into the Vacuum & Sewing Hall of Fame (www.vdta.com). In 2001 Gresham’s daughter Lindsay Gresham Weeks became the third generation to join the business. Weeks manages everyday operations while her dad is on the road at sewing shows, which bring in thirty percent of their business.

“I love working here. Our number one goal is making sure customers are happy,” Weeks says. “We have a small family, so our customers are more like family. If they need advice, we know what we’re talking about.”

“I feel safe here learning how to use an expensive machine; I don’t worry about breaking it,” says Jan Tkach, taking a Wednesday embroidery class at Ray’s.

“I used to sell 100 percent mechanical machines, but the last 15 or 20 years, 90 percent are electronic, computer-operated or robotic embroidery machines,” says Gresham. “Stay away from discount store machines that are cheaply made. You’re just buying a box. You need classes and customer support,” he advises.

Joanne Pizzica thinks it’s worth the long drive from Monterey to have Gresham service her three sewing machines.

“I used to drive from Paradise,” she says. “The prices are excellent and the service is superior. Why else would you drive 300 miles?”

Ray Gresham, a native Texan, never intended to become a reputed sewing machine expert and build a family-run business that his son and granddaughter would carry on. But life in the Santa Clara Valley, where Ray had visited while on shore leave from the Navy, was full of possibilities at the end of WWII, and when Ray was discharged, he and his new wife, Deon, a college home economics major, settled in Santa Clara.

In the entrepreneurial spirit of the Valley, Ray, a full-time machinist, started buying old sewing machines on the side, repairing them in a bedroom of his house, and renting them out for $1 per week. In 1947 when the business got too brisk for his home, Ray moved it to a retail site on Park Avenue, San Jose. He quit his machinist job and dedicated himself full time to renting, selling, and servicing sewing machines. Deon did the bookkeeping and taught classes. After Ray’s passing in 2008, Gresham moved Ray’s to 545 Meridian Avenue, San Jose.

As for the future, Gresham says that sewing is back in vogue with young people, whose parents are buying them machines for Christmas and birthdays. He attributes the cable TV reality show “Project Runway” with sparking an interest in sewing among teens to college-age youth. Weeks runs a sewing day camp that enrolled 320 children in 20 classes last summer. For adults, Ray’s has organized a patriotic-themed Sew Easy Embroidery Retreat July 17 – July 21 in Reno, Nevada.

For information, call (408) 295-6901 or visit www.rayssewingcenter.net. Better yet, drop by Ray’s Sewing Machine Center and become one of the family.

Shopping Santa Clara: Decorate With Original Art on Any Budget