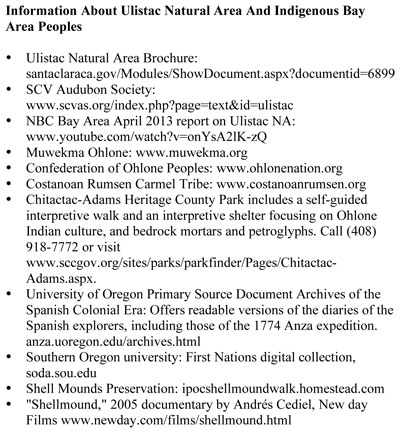 Ulistac Natural Area is more than a place that reclaims prehistoric California, before Homo sapiens ever set foot here. With some investment, it could also serve an important cultural purpose as a center where modern Californians can learn about the Pre-Spanish culture, says State Archeologist Mark Hylkema.

These indigenous Americans – previously called “Costanoans” and currently “Ohlone,” identifiers similar to “European” or “Asian” – had a complex society that had already reshaped the environment before the mission padres arrived.

“It was one of the great population centers in [terms of] numbers and numbers of communities,” says Hylkema. Comprised of some 60 tribes and seven different languages, they were “on the edge” of developing an intensive agriculture. They had political organization, defined territories, territorial leadership, used money, and were already expert at manipulating the environment to maximize their food supply. One of those tribes was the Tamyen, which lived in the area that’s now Ulistac.

The Tamyen settlements followed the course of the Guadalupe River, Hylkema explains.

Before the rivers and creeks were channeled, the Guadalupe overflowed and created levees where silt deposits created levees. The people moved over time as the river’s path changed. But their culture was far from nomadic.

Even the understanding of the park’s name, Ulistac, is rife with misinformation. Rancho Ulistac was the name given the 2,100-acre parcel by “Indian Marcello;” to whom the land was deeded after Mexico’s 1833 Secularization Act – by which the Mexican government repossessed most of the mission lands. Rancho Ulistac was subsequently acquired by Jacob Hoppe, San Jose’s first American Postmaster.

We don’t really know what the name means, according to Hylkema. “Tac” is a Tamyen word ending meaning “place of.” “But the name is not otherwise identifiable,” linguist A. L. Kroeber writes in 1916 in “California Place Names Of Indian Origin” in the journal American Archaeology and Ethnology. “Ores, (bear) and uri, uli (head, hair, or forehead, are the only Costanoan [Ohlone] words known to the author which suggest the stem.”

Despite the cultural and biological onslaught of the Spaniards, California Indians nonetheless might have adapted had they not had the misfortune to be uniquely crushed by the greatest migration in U.S. history: the 1848 California Gold Rush. The impact of that event is incalculable, says Hylkema. In two years the non-native population of California grew roughly 4,000 percent – from about 800 to 300,000. Such a massive migration would have obliterated any culture in its path.

The post-WWII era brought a second great migration. First, of former soldiers who, once introduced to California’s gentle climate and wide-open economic opportunities, had no desire to return to the bleak winters and uncertain job prospects back home. The second part of that migration was the technology gold rush that turned the Santa Clara Valley into Silicon Valley.

Both of these drove massive pressure for development that obliterated California history. “The native cultures that were here became almost invisible because we made them so,” says Hylkema.

One measure of what has been lost is the absence of visible cultural monuments. Consider, what would we know – or search to know – of ancient Egypt without the pyramids, or ancient Celts without Stonehenge?

In the Bay Area alone here were once 425 shell “mounds” previously thought to be kitchen refuse, but are now being reconsidered because their composition shows deliberate construction, explains Hylkema. Today only six of these structures still exist.

“We destroyed those and with them the visible monuments of that culture,” Hylkema laments. “It’s a history that no one knows. There’s very little available to the general public.”

Ulistac Natural Area could be that opportunity to provide a “place” for making that history tangible. “Now we embrace that with the name,” says Hylkema, “and we have this opportunity for education about the native culture and environment.”

Putting the Santa Clara There, There

Community
Author David AlexanderPosted on April 6, 2016
Inside a large balloon-like dome, dozens of children between the ages of five and seven line the periphery of a shallow pool, swim goggles...