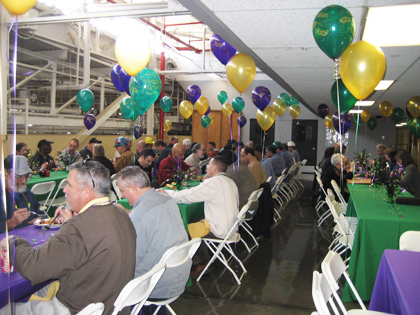 In the U.S., buildings are the number one consumers of energy. Owens Corning is doing something about that. Twenty-four hours a day, seven days a week, the 43-acre Owens Corning manufacturing complex in Santa Clara spits out recycled glass fibers like cotton candy to make its trademark pink fiberglass insulation. The insulation keeps houses and buildings worldwide cool, cozy, and quiet and saves energy.

The production of fiberglass insulation is a noisy, hot, wet, nonstop process that demands the constant attention of plant workers; making it all the more impressive that 257 Owens Corning Santa Clara employees scored a perfect, two-year recordable injury-free safety record while working 1,000,867 hours between January 2, 2009, and January 2, 2011. A recordable injury is a work-related incident that requires medical attention beyond simple first aid.

Owens Corning timed a thank you celebration for employees to coincide with the announcement of its new Eco Touch fiberglass insulation with, a plant-based binder to hold the glass fibers together. EcoTouch insulation is made with 50% total recycled content, the highest certified percentage in the fiberglass insulation industry according to Owens Corning. The Santa Clara plant is now being converted to the production of this environmentally greener, formaldehyde-free insulation.

Owens Corning is also adding Energy Complete Air Infiltration Barrier to its line. This is a latex-based spray sealant—pink, of course—that is applied to wall joints before insulation is installed. The sealant provides an added barrier to dust and insects.

Owens Corning “relentlessly pursues incident-free operations” and adhering to strict safety procedures is a condition of employment, including for field sales representatives in their home offices who watch online safety videos about, for example, safe driving. Even Owens Corning suppliers such as Robert Forsythe with Motion Industries go through company safety orientation.

“Safety is a mindset, doing things in a low-risk manner,” says Drew Pickering, plant safety leader. “Safety, quality, schedule, budget, and cost. It’s a close race for first place, and we have to continually reinforce our safety priority.” Reinforcement comes through on-going safety training and incentives such as monthly lunches.

Outside the plant are mini-mountains of crushed, recycled glass awaiting transformation. “It takes six beer bottles or two wine bottles to make one batt of insulation, so feel free to contribute to our products,” says Doug Vezina, Western Region Sales Leader.

Indoors, the glass is melted in furnaces at 2,500 degrees Fahrenheit. The molten glass is then formed into strands that are water cooled as they are extruded from the furnace. The strands are strengthened and bonded by a chemical binder, which also colors the insulation pink, and formed into a thick pack and oven cured. Next, facing is added to the insulation, and it is cut to width and length as it moves along by conveyor belt. Last is packaging in rolls or batts.

“At first we thought [the safety program] was all overkill,” says 32-year employee Ed Ireland, a maintenance mechanic and president of GMP Local #52, the Glass, Molders, Pottery, Plastics, and Allied Workers Union. “Then the safety numbers started improving, and we were on board after that. It was the right thing to do.”

“We take it home with us, too,” says Ireland. “Safety is something that catches on.”