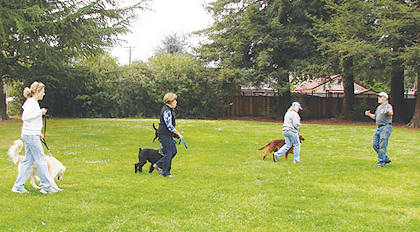 For nearly 45 years Walt Nagle of Mission City Dog Training has been training dogs and at some point during the last 30 years you may have seen him on Saturday mornings at Maywood Park with a handful of owners and their pups.

“I trained a number of dogs over the years and got connected with a local dog trainer,” said Nagle. “I apprenticed under her until I was ready and then I took over.”

Nagle trains dogs of all types and ages but believes bigger breeds need to be started at an early age to “establish a good relationship with the owners and their families and establish a hierarchy in the family. The dog needs to understand that they are not the boss – people are the boss.”

Part of Nagle’s goal is to get the owners trained as well as the dogs and that smacking a dog will just make a tough dog tougher. “I don’t like harsh training so everything I do is pretty gentle.”

The dogs that attend Mission City Dog Training classes are taught to heel, stay, lay down, and come when called in the beginning class. In the advanced class, there is some training done without a leash, some rally training and dogs are taught to retrieve. Nagle helps with behavioral issues such as excessive barking and jumping.

Some of the benefits of training at Mission City Dog Training is that the dogs are trained outdoors where there is extra stimuli opposed to in a controlled atmosphere. Nagle also encourages people that dog training is for the whole family. “I encourage people to bring the kids. I don’t train guard dogs or hunting dogs. I train family dogs.”

Mission City Dog Training was, at one point, the second most popular class offered by the city and Nagle plans to keep training in Santa Clara even though he no longer works exclusively with the city. ‘I have such a great relationship with the City of Santa Clara that I want to stick with that.”

The city has only placed two restrictions on Nagel – that the classes would give preference to residents of Santa Clara and that the fees would be kept low. As it is, Mission City Dog Training is a steal for dog owners. The cost for Nagel’s six-week classes is nearly 50 percent less than some of the private training offered through other organizations. Nagle charges $50 per dog. Any two-dog family who wants to train their dogs at the same time will receive a 50 percent discount on the second dog. Each additional course a dog is enrolled in will cost $5 less than the original price until the price reaches $20. Nagle does this to encourage owners to continue training their dogs.

“I try to make it fun yet productive,” said Nagle. “If it’s not fun, people won’t stick with it.”

Mission City Dog Training classes run every six weeks from April through Christmas. Classes are not held on three day weekends and holidays. Additional information can be found at http://we.got.net/people/wnagle/mcdt.html or by calling 831-465-1491.

Business
Author Melissa McKenziePosted on August 2, 2017
Montage Dance Studio’s owner, Lauren Hoskins, 31, is a Santa Clara native whose love of dance began the instant she set foot on the...

Business
Author Diane AndrewsPosted on March 2, 2011
All the builders, do-it-yourself guys, wood hobbyists, and auto repair buffs in Silicon Valley are excited. No, they more than excited. They are thrilled...

Business Community
Author Erika TownePosted on September 12, 2019
It opened quietly and with very little fanfare, but nestled in a small office complex off Mary Avenue in Sunnyvale is The Meadows Outpatient...
SPONSORED