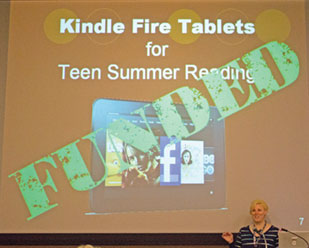 “Everyone here is associated with the organization and they all give of time and treasure to this organization. We have $25,000 to give away tonight…and the librarians will say I want this or I want that and then people will vote on what they want funded…At the end of the evening we announce [the winners],” said Executive Director Maria Daane. “Sometimes, we’ll have people talk to us afterwards and say ‘I’ll pay for that’ and so sometimes we have more than $25,000. In fact, we already have $1,400 funded, which we’ve never had before. One thousand is for children’s literacy outreach. It’s for children living in shelters in Santa Clara. We go and we do early literacy training with their families. We teach the parents how to read books to their children. Then they keep reading and we reward them by giving them books. It’s good fun and it’s really important to get those messages to that group, because the kids are not coming here for story time and a lot of them don’t have books. And the other $450 was to pay for Kindles, which will be used as giveaways.”

SCCLFF raises the funds for the library’s programs through book sales – the library’s bookstore, Saturday book sales, and a presence on Amazon.com. The sales bring in enough money to enable the foundation to give away approximately $25,000 at the annual chocolate party every spring, leaving about $20,000 up for grabs in the fall.

Prior to hearing pitches for 10 different programs that needed funding, guests sampled an array of chocolate goodies – with a few healthy items thrown in. Each of the dishes was either made or purchased by one of the volunteers. 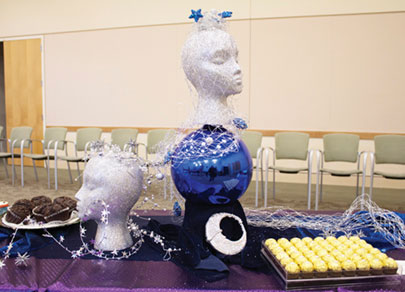 “We all pitch in,” said Associate Executive Director Tracy Wingrove who made a flourless chocolate cake for the event. “[Bringing something] is not required to come. You don’t have to bring anything, but as more people come, there will be more and more goodies arriving. It always works out. It’s one of those things. We have a great group of volunteers and no one ever goes hungry at our events.”

After the votes were tallied and additional calls were made to some of SCCLFF’s donors, nearly all of the programs received complete funding.

“I think what always touches me is that everyone here loves the library and all of them want the library to serve the community in the best way possible,” said Daane. “And they all serve in different ways…and I’m just touched over and over again by the commitment and passion that they have.”

The library is still trying to raise an additional $750 for the Adult Summer Reading program and would like to help fund the remaining $5,000 needed to update the library’s digital microfilm viewer. Those interested in donating can write a check made out to SCCLFF with the program listed in the memo. They can also donate to the general fund. Credit card payments can be made through lovethelibrary.org.