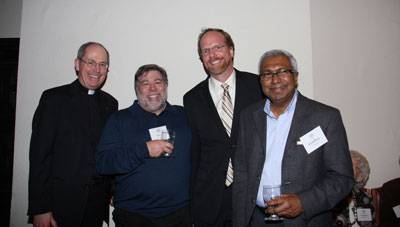 Wozniak’s local-boy-makes-good story is legendary: A middleclass kid is born in San Jose in 1950, grows up in Sunnyvale, graduates from Homestead High School in Cupertino, and attends De Anza Community College. The self-described young “geeky nerd” with a passion for engineering builds the first personal computer and—with a little marketing help from his late friend Steve Jobs—changes not just Santa Clara Valley but the world.

“Steve Wozniak—from Garage to Global Importance: the Rise of the PC” was the second presentation in the 2011 – 2012 SCU President’s Speaker Series honoring the centennial of the School of Engineering and highlighting its motto: “Engineering with a Mission.”

“Engineering is about truth and fact, and engineers are the most truthful people in the world. I want to be known as a high-quality engineer first,” says Wozniak. “We design products that change life.”

“While Steve Wozniak is a techno-hero to many, on a sad note, there will be no ‘Dancing with the Stars’ tonight,” says SCU President Fr. Michael E. Engh, S.J. His introduction elicited the first of many laughs the crowd enjoyed during an hour with Wozniak.

Wozniak’s wife, Janet Hill Wozniak, was in charge of disentangling him from the 125 invitees at a pre-event reception on campus and getting him to the theater on time. (The Wozniaks married fortuitously on 08-08-08 at exactly 8 p.m. at a Segway Fest in Indianapolis, where they surprised friends at dinner with their wedding ceremony and pledged their love with rubber rings from a gumball machine.)

“You used to ask a smart person a question, but now you ask Google,” says Wozniak, a Polish-American known for his pranks, which he relishes recounting as much as his engineering feats.

A favorite prank was setting up a phone hotline for daily Polish jokes. When the Polish American Congress complained, he suggested changing to Italian jokes but had to give up because the dial-a-joke line was too expensive.

“It was before political correctness,” he says.

“Giving money doesn’t mean anything to you if you have it. You give yourself if it’s important,” says Wozniak, who has generously given both his time and money to the community. He spent ten years teaching 5th grade children how to use computers in their classes.

“If I couldn’t have been an engineer, I would’ve been…a fifth-grade teacher,” he writes in his 2006 memoir iWoz, Computer Geek to Cult Icon.

“My sense is that Wozniak has a sense of community and service,” says SCU Professor of Communication Fr. Paul Soukup, S.J. “I admire when he was teaching grammar school in Los Gatos. He recognizes we won’t have another generation of innovative young people—of thinkers—unless we have really solid teaching in grammar school to get kids excited.”

Wozniak’s story of earned success should be told to all kids. It is the story of a boy tinkering alone in his bedroom and years later in his friend’s garage and not quitting until he had exceeded his goal.

“I did it because I loved it. You know you’re doing what you want to do in life and you love it,” says Wozniak, an inventor, innovator and day dreamer who wonders what more is possible and how to make it simple and easy for people to use, like his favorite Apple II computer.

Q: What makes you happiest every day?
A: I’d be nothing without my wife…movies that bring emotion to me…jokes every day.

Q: What’s your worst project?
A: Every single project I ever worked on was an A+ project. All my ideas worked—except for a dog GPS.

Q: How can we improve STEM [science, technology, engineering, and mathematics] education in the U.S.?
A: The paradigm of education must change…[allowing] students to be creative.

Q: What’s the next big thing everyone will be talking about?
A: A small computer to have consciousness and be your best friend—in 40 to 200 years.