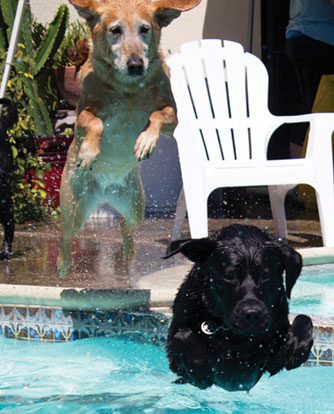 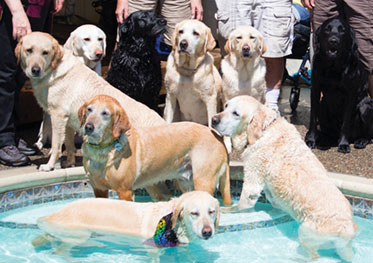 It was a literally a dog day afternoon when the South Bay chapter of Canine Companions for Independence (CCI) hosted its 15th annual Puppy Pool Party in Santa Clara on August 4.

The event, hosted by former breeder-caretaker Joyce Fisher, gave nearly 20 companion dogs the opportunity to frolic in the sunshine and splash in the pool.

Fisher’s Puppy Pool Party, however, was not some magically masterminded event. In fact, it started purely by accident when Fisher set up an opportunity for a couple of CCI graduates to socialize in her backyard.

“One of the girls, who was in a wheelchair, came around the corner and she just started yelling at me,” said Fisher. “She said, ‘you didn’t tell me you had a pool. I can’t control my dog around a pool. My dog is really good but I can’t control it around a pool.’ And I said, ‘well, can he just go in?’ And she said, ‘well, yeah, if that’s ok.’ So then Melissa [Lucia] came with her dog and she said, ‘if Wayne’s in the water, can Winger go in the water?’ And the puppy pool party was born 15 years ago.”

“We’ve actually had 16 of them,” continued Fisher. “One year one of the girls was coming up from Santa Cruz and her car broke down. She was so disappointed that we all just regrouped the next weekend.”

Over the years the Puppy Pool Party, which is always held the first weekend of August, has grown significantly – so much that another party was added.

“We do have a [dog-in-training] pool party too,” said CCI South Bay Chapter President Linda Cortez. “We had too many dogs so we had to split it. We have over 80 working teams in the South Bay so this isn’t even all our dogs. [This event] is a day to be a dog. It’s a treat for them to be around other CCI dogs and play” 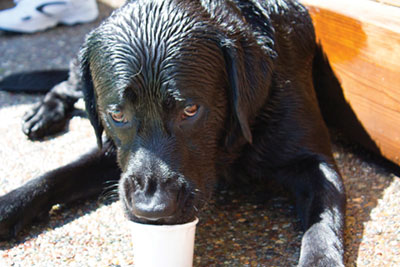 In addition to a fun-filled day of water play, each dog was treated to a Frosty Paws ice cream cup. Their companions were also got something special – they indulged on carrot cake to celebrate the fifth birthday of Marv Tuttle’s dog, Yara.

“I run a program called Day of Discovery that gives children with special needs the chance to experience scuba diving in the tide pools at the Monterey Bay Aquarium at no cost…Yara motivates and comforts children who are reluctant to get in the water,” said Tuttle in his bio on the DogFest Walk ‘n Roll fundraiser website. “We also volunteer at the VA hospital with wounded veterans and at Santa Clara Valley Medical Center with patients who have spinal cord injuries. I have been blessed with this incredible dog, so I try to pay it forward by demonstrating that having a disability doesn’t mean you can’t have an active and fulfilling life.”

CCI is a non-profit organization based in Santa Rosa. Graduates go through a rigorous and comprehensive training process before they are turned over – at no cost – to their companions. Visit www.cci.org for more information.