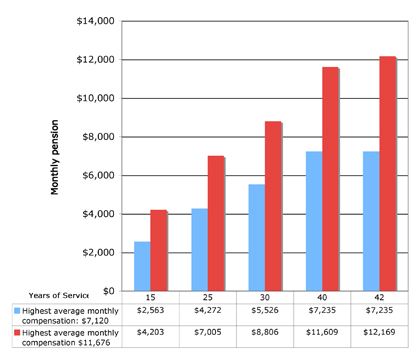 There’s no shortage of potential scapegoats for the fact that California – the world’s 8th largest economy – can’t pay its bills. And defined benefit public pensions are a favorite straw man.

CalSTRS operates differently, however, from CalPERS, and the fund cannot set employers’ contribution rates. Teachers contribute 8 percent of their pay to retirement, school districts contribute 8.25 percent and the state underwrites 4.5 percent. The median age for teacher retirement is currently about 62, according to CalSTRS June 2010 reporting. Median service credit is 27 years, for an average benefit of $4,256.

Benefits are based on a formula that considers age, years of service, highest average monthly salary, and unused sick leave – but not how much teachers contribute or CalSTRS investment returns.

This makes it possible for school system retirees to make more retired than they did working. That’s because unused sick leave counts as additional days of service. In addition, employees with more than 30 years of service get a $400 monthly pension bonus.

The chart shows theoretical pension benefits for two hypothetical Santa Clara Union School District retirees, whose highest average monthly pay is $7,120 and $11,676 respectively. Note that only after 40 years of service credit do pensions nudge past salaries.

Since teachers’ contracts are typically negotiated by senior union members – those closest to retirement – the system has a built-in momentum to maintain the highest compensation rates. Some say that this is at the cost of salaries and benefits for beginning teachers.