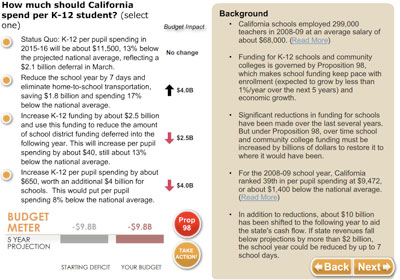 More than a few of us have said – or thought – that surely we could do better than California’s state legislature at managing the state’s $68 billion budget. But, as most know, talking is easier than doing – especially when the subject is something we have no hands-on knowledge about.

For those who are willing to risk the purity of their prejudices – you know, the “government, drug laws, taxes, proposition 13 (fill in the blank) is the problem” litany – the non-partisan public interest group Next 10 (next10.org) has updated its interactive state budget balancing exercise, BudgetChallenge.org, for 2011-12.

This informative simulation lets you try your hand at making the hard choices needed to address our collective fiscal woes – both on the spending and income sides of the ledger -and look squarely at the tradeoffs and consequences.

For example, the first item is about education.

Want to keep spending the same? OK, that keeps California’s spending 13 percent below the national average.

Or maybe you’d like to cut the school year and school buses to save $4 billion. Fine, but you’ll have to put a cork in all that talk about Silicon Valley’s international leadership.

Another choice is to modestly increase education funding so that California is only 8 percent below average. But be advised: that’s a $4 billion bill that’s going to come due before you finish the exercise.

The point of the site isn’t to push any one POV or another. It’s to make you – the taxpayer and voter – participate in the necessary decisions and look straight into the faces of their consequences.

At this point some are asking: How did I do on this test? I guess you could say I passed because I balanced the budget. In fact, I garnered a $1.6 billion surplus. Because I have no intention of ever running for public office, I can tell you how I did it. 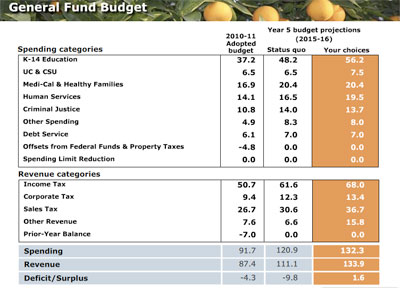 I increased public spending and I raised income taxes, increased public employee benefit contributions, eliminated Prop 13 for commercial property, and applied sales taxes to Internet sales – among other things – to pay for it. My quibble with the site is that options are limited.

For example, you don’t get the choice to decriminalize or legalize (and tax) marijuana. This is non-trivial. Some of you may recall that repealing Prohibition – and restoring tax revenue from alcohol – was a key to both crime-fighting and economic policy in 1930s.

So here’s my picture:

I make no bones about it. Taxes are, as Justice Oliver Wendell said, the price we pay to live in a civilized society. Instead of, say, anarchy like Somalia, which has no taxes except the tributes imposed by its psychopath warlords.

Take your shot at the California budget at BudgetChallenge.org and share the results with us at cschuk@earthlink.net.