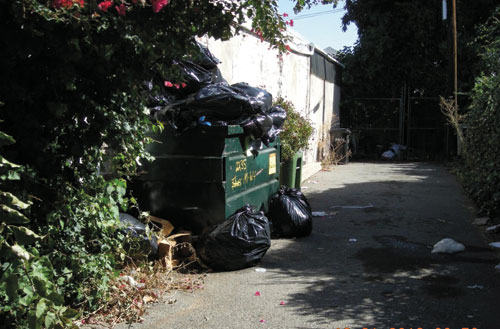 Two weeks ago the Santa Clara City Council revisited the traffic and trash problems in the Hilmar neighborhood that residents say are associated with businesses around the 2200 block of The Alameda. As anyone could readily anticipate, the problems have only gotten worse since the Council pasted some new parking regulations on the problem and shelved it for six months.

And now that Ike’s Lair has set up shop in that area, problems have gotten worse as patrons drive in from across the county to the wildly popular sandwich chain. “Once the sandwich shop came in,” reported resident Chris Lazero, “it was an all day, every day thing.”

Even the Normandy House Lounge – which in the past was the subject of nuisance complaints – got back into the conversation after many years’ absence from the public discourse.

Resident Margie Slivinski went beyond simply detailing complaints to offering a proposal: a public nuisance injunction against neighborhood loiterers, similar to what San Jose’s Rock Springs neighborhood did to stop gang activity in the 1990s.*

One challenge that Santa Clara would face in trying to use the nuisance law however, said Santa Clara City Attorney Ren Nosky, is that in Rock Springs the gang members were clearly identifiable. The question of exactly whom an injunction would target in the Hilmar neighborhood is less than clear.

The brunt of the night’s criticism went – as in May – to patrons of the Smoke This Hookah Lounge. (Now that Martin’s Bar on Main Street is gone, it seems that Martin’s role as a lightening rod for public complaint has been re-assigned to the hookah lounge.)

The Santa Clara Police Department can attest to the neighborhood’s problems. Calls and citations in that area are far higher than any other city neighborhood, according to acting police chief Kevin Kyle. “Parking complaints in this neighborhood are off the charts,” he said, noting that there have been116 parking complaints and 62 ‘behavior’ complaints.

The PD issued 86 citations, with an additional 62 ‘contacts’ that didn’t result in charges. Complaints come typically between 9:00 p.m. and 11:00 p.m. – times when the only open business is the hookah lounge.

Smoke This was cited twice last year, according to Santa Clara Fire Marshal Marty von Raesfeld. The charges included operating after hours, overcrowding, and permitting smoking on outside patio.

“I wish they [the neighborhood organization] would have made me part of these meetings,” said Smoke This owner Naveed Anwar. “I live right down the street. I’m not the only business that’s open in the evening. I’ve followed all the rules.”

Anwar also operates the Wrap This restaurant and the Valkyrie Arms gun conversion and “off roster” weapons shop – all on the same block as the hookah lounge – plus holds down a day job at Intel.

Anwar’s response to the neighborhood’s complaint, as he said last June in an appeal against changing the parking regulations, was that “The Alameda, the University, multiple frat and party houses and general activity on the thoroughfare create the circumstances which result in some of these regrettable incidents. Pinning the blame on this establishment specifically would result in unfair accusations which this business has attempted to address nevertheless.”

The core of the problem is that the businesses in question have no off-street parking for employees or customers. That’s because the buildings were constructed in 1925, when none was required. Thus, they’re exempted from current parking requirements.

The city’s options are limited.

Fines can be levied against businesses for violations, and repeated violations can be grounds for not renewing use permits. But Santa Clara’s permitting method doesn’t allow permits to be revoked at will.

The Council can change the zoning, but existing businesses would retain rights to continue non-conforming uses, explained Nosky. “Any zoning change could…phase out existing uses over an extended period of time. But we’re talking about years, not months.”

After more than an hour of discussion, the Council agreed by consensus to ask city staff for a report on the options, including: restricting the hookah lounge’s operating hours, stepping up code and law enforcement in the area, changing zoning for that section of The Alameda, and restricting parking in a larger area than currently.

*In 1993, the San Jose City Attorney used California’s public nuisance law to shut down the Surenos street gang. The law defines a public nuisance as “an unreasonable interference with a right common to the general public…which affects at the same time an entire community or neighborhood, or any considerable number of persons.” (California Civil Code: 3479). The California Supreme Court rejected a First Amendment challenge to the injunction.

An Important Message to the Santa Clara Community