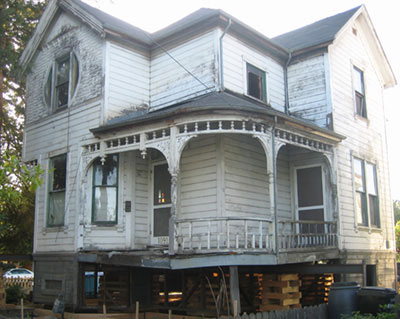 Santa Clara is about to launch its second push for a historic preservation ordinance in 10 years, after a furor erupted in May over renovation of an 1890s house at 1091 Harrison St.

At the June 11 meeting, the City Council asked city staff to draft a historical preservation ordinance for review in 45 days. In the interim, requests for building permits for property that’s on the city’s historical list will be reviewed by the Historical and Landmarks Commission (HLC). The City considered a historic preservation ordinance in 2005, but discussion stalled over disagreement about the boundaries of a historic district. This time around, they hope to do better.

The renovation project illustrates the ambiguity surrounding historic properties in the absence of a city ordinance, as well as ambiguity about the role of the HLC.

The house at 1091 Harrison is significant for two reasons.

First, it’s part of the only full block of Santa Clara with its original late 19th century streetscape intact. Second, the house is a Stick-Eastlake Victorian, a brief architectural style between Carpenter Gothic and Queen Anne, and there are few examples of it anywhere.

Known as the Lovell House, it’s listed on the City’s Architecturally or Historically Significant Properties List (part of the 2010 General Plan). The property doesn’t have a Mills Act tax exemption – the state law that reduces property taxes on historic properties in return for owners investing in preservation and restoration.

The house was owned by three generations of a single family, during which time no maintenance was done on the property – reportedly, when the house was finally sold to settle an estate in 2011 it didn’t have a properly-functioning kitchen or bathroom. The “significantly deteriorated” condition of the house was one reason that there was a sense of urgency about expediting the work, before “deteriorated” became “beyond repair,” according to City Planning Director Kevin Riley.

In 2012 the owner filed an application for architectural review and has been working since then with the Planning staff on construction plans, according to the staff report, to renovate the house, replace the back porch, build a new foundation, and basement living space. “The work on the property is substantial,” said the agenda report. However, it doesn’t change the structure’s footprint, or its street-facing appearance.

The owner completed required historic documentation and preservation plan, using a City-recommended consultant, as well as a determination of consistency with the federal government’s standards for historic resources, and review for compliance with Califoirnia’s CEQA requirements for historic preservation. Planning granted architectural approval and issued building permits in February and April.

“We might have more wisely chosen to agendize this for HLC review,” said Riley at the June 11 meeting. “This project has become a catalyst for the ongoing struggle trying to determine just what projects should go before the commissions. There have never been written guidelines. Maybe the time has cone to have those.”

The owner saw something in this house, said Riley, “and should be commended and not admonished for a house that is being returned to what it should be. I’m glad someone stepped up to buy this,” adding as a reminder, “construction is always a mess.”

“When we draft this ordinance, we need to look at balance,” said Council Member Lisa Gillmor, whose office is in the historic downtown, in the Franklin Mall.

“I like to encourage people to take the old houses and invest in the Old Quad…[but] based on what happened with this house, if I were thinking about investing in the Old Quad, I would run. I don’t like to see neighbors pitted against neighbors. We need something that’s good for everyone in the old quad, [and] at the same time encourage people to invest in our Old Quad.”

HLC members are angry that they were given no opportunity to review the project – City Code doesn’t require the Planning Dept. to do so. “Arbitrary and opaque decision making in the planning department” and “obfuscation” “that has resulted in a huge loss of public trust,” is how nieghborhood resident Tom Hinton described it at the June 11 Council meeting – the second where HLC members turned out in force, some wearing tee-shirts with “HLC” in bold letters.

Neighbors complain about construction noise and debris, and say work isn’t proceeding according to the plan and proper construction practice. Further, they say reusable original material from the interior isn’t being properly salvaged as the plan described, and the elevation of the house is being changed (the plan calls for it to remain the same). Further, neighbors insinuate that the basement is intended as a rental, although the owner hasn’t applied for a zoning change.

On June 6, the owner came to the HLC meeting to answer questions, and, according to an audience member, was subjected to a rather hostile inquisition from the commission, which demanded a stop work order. However, unless the owner violates the terms of the construction permits, the city cannot legally stop permitted work. Planning says that the project has been repeatedly inspected and the work is generally consistent with plans and code requirements. Despite this, neighbors have been calling the police out repeatedly, often several times within the same day.

However, neighbors do have some grounds for complaint, noted City Manager Julio Fuentes at the June 11 Council meeting. Number one is a noisy electric generator – the developer was ordered to install a temporary power pole by the end of the week. Further, the developer was cited for mixing reusable parts with debris, and not properly storing salvaged material. If these issues aren’t resolved quickly, added Fuentes, “We’ll look at our option for compliance.”

In the last two weeks the dispute has escalated beyond discussions about proper handling of old woodwork. Around June 15, the contractor quit the job – a serious move, construction experts say, because of the almost-certain financial loss.

Further, last Tuesday one neighbor went to City Hall to complain about the construction. She created such a profanity-filled disturbance, observers say, that the police were called and escorted the woman from the building. The WEEKLY has confirmed that a police report was filed.

Although 1091’s owner declined to speak with the WEEKLY at this time, an advisor close to him said that it would be reasonable to surmise that he is considering his legal options.