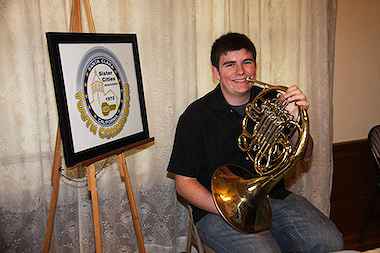 Ian Hower is a community contributor and has been for most of his young years. He is pursuing a dream now for an adult career of service.

“In sixth grade, I was a Den Chief for my brother’s Cub Scout troop. That stint started my community service interest,” explains the enthusiastic young adult. “My initiation to music started in fourth grade, as I played the trumpet then,” Hower continues. Music and service to the community both play an important role in Hower’s plans for the future.

“In eighth grade I joined Santa Clara Sister Cities Association because I played French horn at the Art & Wine Festival with the Buscher Jazz Band and Déjà vu Band. I went with the Déjà vu Band to Europe in 2006. My music teacher Ms. Elizabeth Hunter was working on tying music and the Sister Cities program together,” says the Santa Clara High senior. “I traveled since I was two years old, but this was the first time with a group.”

In his freshman year at Santa Clara High, Hower joined the marching band. He became the sectional leader in his sophomore year, and in his junior year was the treasurer of the Band Council. The Band Council plans and organizes events, and manages student resources, according to Hower. As a senior, he is currently the president of the Band Council.

Hower likes to foster creativity and innovation. “The Band Council did something unprecedented this year. We had a separate float in the Homecoming Parade with the theme of Ireland. Our school band is going to Limerick to play for St. Patrick’s Day there this year. We did our own fund-raising with car washes and rummage sales. Funds used in the past for music programs have been taken away.”

“My mission in becoming president was to develop a stronger sense of community, create more events, help pull off the Ireland trip, improve communication with the Boosters, encourage more student involvement, and use every resource available,” Hower states.

“We are collecting resources and there is student excitement not only about traveling abroad but about being involved locally in Santa Clara,” he proudly shares. In July of 2010, Hower was chosen to take part in the Sister Cities International Youth Leadership Conference. “I learned about global relations,” comments Hower.

“I made a speech to the City Council about the Leadership Conference I attended in New Mexico. It pushes your comfort zone to make a presentation, but expands your horizons. I have matured over the years, thanks to Sister Cities,” Hower remarks.

“I volunteered to become President of SCSCA Youth Commission to have more of a voice and to bring up others to have their own voice,” explains the committed leader.

“The Santa Clara Sister Cities program has driven me to become more involved in the community and stoked my interest in international affairs. My Civics teacher was Mr. Caserta, who ran for State Assembly and inspired me. My mother was a Political Science major, and helped create my initial interest,” Hower adds.

“I plan to attend college and study abroad in political science and international relations. I would like to be a Congressman so I could have a constituency to represent,” Hower concludes.

Keeping the Spirit of '45 Alive through Personal Stories

Community
Author Cynthia ChengPosted on October 22, 2014
“What will life be like in 2064?” ponders Mary Boyle, local history and genealogy librarian at the Santa Clara City Library. “Will people then...
SPONSORED