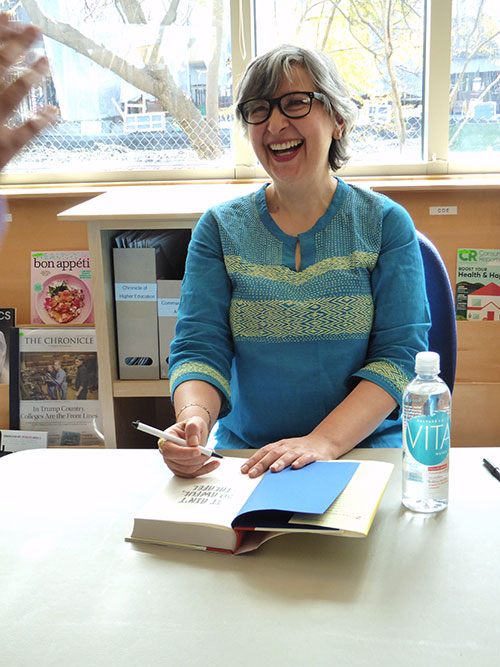 Asked about how Iranians reacted to her books, Dumas said that some were disappointed that she didn’t write about hardship and suffering. Instead, she writes humorously and frankly about the foibles of an Iranian immigrant family in America, something, she says, no one else is doing.

“Funny in Farsi: A Memoir of Growing Up Iranian in America,” published in 2003, is Dumas’s first book. She wrote it when she was 36 because she wanted her family–her French husband, whom she met at UC Berkeley, and their then two children (now three)–to know her stories, just as her father had shared his childhood stories with the family.

“Dad was such a big influence,” said Dumas. “He said if he could only educate one person, it would be his daughter. Otherwise, she’d be at the mercy of the world. He believed education was this golden key. It’s the source of empowerment.”

In “Funny in Farsi,” Dumas shares anecdotally the experiences of her family after they moved from Iran to California. It was1972, and she was a second grader who ingratiated herself with her classmates by writing their names on the blackboard from right to left in Persian.

After living in California for two years, her family returned to Iran and then came back to California at the time of the Iranian hostage crisis, 1977 – 1980, and stayed. Attitudes toward Iranians had changed from curious and welcoming to hostile, and kids played cowboys and Iranians rather than cowboys and Indians.

“How quickly do you jump on this hatred bandwagon?” she asked the audience rhetorically.

Dumas wrote a second “New York Times” best-selling memoir in 2009–”Laughing Without an Accent: Adventures of a Global Citizen.” Then in 2016 she wrote “It Ain’t So Awful, Falafel,” a semi-autographical novel about an Iranian American middle school girl growing up in Newport Beach, CA, during the Iran hostage crisis years.

“My purpose in writing is to build bridges,” Dumas told the students, faculty and other attendees–277 in total– at her 11 a.m. and 7 p.m. presentations. She says her writing is “about coming to America and trying to find your place here.”

“Our commonalities far outweigh our differences,” said Dumas. “The human experience is quite universal.”

“The stories are so reliable on every level. No matter which countries my students are from, they can relate to the stories,” said Manoukian.

“I liked the humorous representation of her life. She made the best of everything. She is open minded and truthful,” said Mission College student Diego Jimenez, president of the Freedom Writers Club (FWC).

“I absolutely loved [the presentation]. I loved the use of comedy throughout her speaking style,” said FWC member Dorothy Stone. “I learned that you don’t need to think to write. Just go ahead and write what you’re feeling. Don’t fear judgment, the criticism of other people.”

For information about Dumas and her books, visit her website: www.firoozehdumas.com. The Mission College Freedom Writers Club, which encourages students to free themselves up to write and grow as people, meets Wednesdays, 5 p.m. to 6 p.m. in the college Club Room.

“People ask me if there’s such a thing as a flying carpet,” said Dumas, who is, after all, from the land of famous Persian carpets. “I say, ‘Yes, a library card.'”