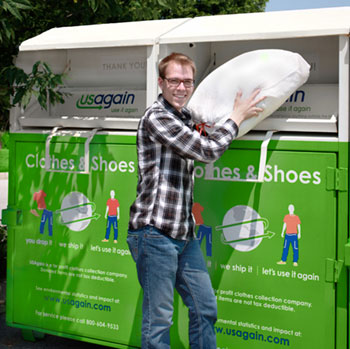 A paint-splattered T-shirt, stained table napkins, moth-eaten sweater, old walking shoes, ripped jeans, curtains the cat shredded—you may as well discard these items. If you can’t use them, nobody else would want them either, right? Wrong. Regardless of condition, USAgain wants your used textile items.

USAgain, (pronounced ‘use again’) is a nationwide textile recycler that collects and saves used clothes, other textiles, and shoes from landfills. It partners with organizations, including schools, to bring convenient textile recycling service to their doorsteps.

“By extending the useful life of clothing and other textiles, we can conserve resources and avoid waste and pollution from new manufacturing, which is responsible for 10 percent of the global carbon impact and 20 percent of industrial water pollution,” writes Mattias Wallander, CEO of USAgain.

In 2012, USAgain kept nearly 58 million pounds of textiles out of landfills—more than one million pounds per week. While that’s an impressive figure, consider EPA statistics that only 15 percent of clothing and shoes are recycled, and 11.1 million tons of textiles are trashed annually in the U.S.

Started in 1999 in Seattle, USAgain now has a network of more than 12,000 clothing collection points in 18 states. It has green and white collection bins around the Bay Area, including Santa Clara, and a warehouse in Hayward, where shoes are separated from the textiles, which are baled under high pressure.

“We chose the Bay Area three years ago because of its population density and well-established commitment to the environment,” says Wallander.

So far in 2013, USAgain and Santa Clara have recycled about 8,000 pounds of textiles, preventing the emission of over 55,000 pounds of carbon dioxide. Can’t picture a pound of textiles and its environmental impact? Making one cotton t-shirt, which weighs about six ounces, takes 700 gallons of water and 1/3 pound of pesticides and herbicides and generates 14 pounds of CO2.

Seventy percent of the world wears secondhand clothes. USAgain sells the textiles it collects directly to thrift shops in the U.S. and grading companies that sell the wearable items to exporters to Eastern Europe, South America, and Africa. Thrift shops eventually sell their leftover clothing to graders. This secondhand clothing trade is valued at over $1 billion worldwide, with the U.S. being the world’s largest exporter.

Nothing gets wasted. The graders sell what cannot be reused as clothing to manufacturers that transform it into new items such as wiping rags, placemats, wine bottle coolers, and even insulation made from denim.

Visit the USAgain website (www.usagain.com) for clothing drop box locations and information about hosting a drop box or sponsoring a collection drive at your business or school. Schools can partner with USAgain to organize a textile recycling fundraiser to benefit the school.

November 15 is America Recycles Day (www.americarecyclesday.org)—perhaps a good day to clean out your clothes closet.