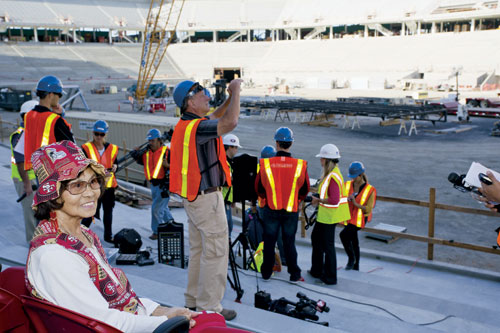 That’s why last week’s installation of the first seats at Santa Clara’s new Levi’s Stadium was a unique milestone. It made the 49ers’ new home tangible in a way that everyone can understand.

For Fremont resident Miranda Margheim and her son, Stephen, who bought those two seats near the 10-yard line, the construction milestone was personal.

At a Santa Clara event marking the construction milestone last week, the Margheims were the guests of honor as they personally oversaw the installation of their seats. The family has held season tickets to 49ers games since the team played in San Francisco’s Kezar Stadium in 1971.

The event was even more hands-on for the Margheims when they got to place the seat numbers on their own seats. Miranda Margheim beamed as she took her place in her brand-new Levi’s Stadium seat for the first time, the broad smile on her face saying it all. She did, however, tell NBC News’ Kris Sanchez, “No splinters!”

Being closer to fans is one of the key drivers of the Levi’s Stadium’s design. About two-thirds of the seats – over 45,000 – are in the lower deck, bringing the majority of fans closer to the game. Plus, the stadium design eliminates the traditional club mezzanine level, which brings fans in the upper deck closer to the field.

“The stadium is going to be a showcase for a lot of different things,” said 49ers COO Paraag Marathe at the event. “The Levi’s Stadium being the smartest stadium, being a software-driven stadium, with high density Wi-Fi for every person, with in-seat delivery to every seat in the house of food, beverage and merchandise. We’ve talked about all events and 49er games being powered by the sun. All of these really neat things. But all of it starts with, and none of it means anything without, a seat. That’s why today is a special day.”

And, as it turns out, there will be room for even more fans than when the Santa Clara stadium was first designed. Project officials say that they now expect the stadium to hold between 69,000 and 70,000. This is thanks to construction supervisors on the ground, who were able to find space for extra seats without changing the stadium’s structure or seat sizes.

Manufactured locally in Hayward, the seats are made from entirely recyclable materials. Installation will take over 17,000 man-hours – about three months. You can follow the stadium construction at http://levisstadium.com/live-view.