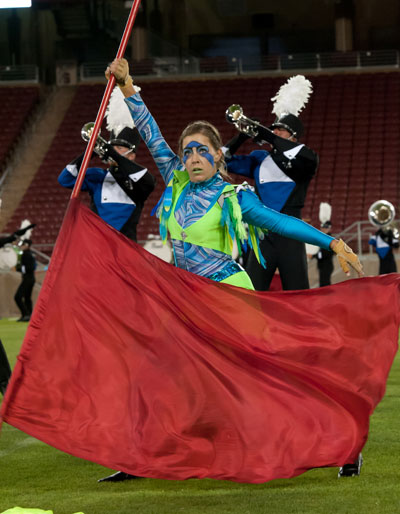 The rumble of the bass drum started slowly and built gradually. Before the drumming reached its full crescendo, everyone in the stadium was listening and waiting for what would come next. As the audience literally inched forward in their seats, the drum major gave the signal and the show began in earnest.

Over the next three hours, Stanford Stadium was filled with a visual and audio spectacle at the DCI (Drum Corps International) West competition. Teams from as far away as Boston, Massachusetts and Rockford, Illinois thrilled the crowd with what DCI billed as the “Best of the West.” “Best” was an apt term as the participating teams performed at their best level. “Even though I’ve been attending these shows for a few years now, this is the best I’ve seen,” said a member of the audience. Even first-timer Christina from Santa Clara agreed. “I had no idea what to expect. This is something I want to see again.”

Unfortunately, one feature that is badly overlooked by the general public is the excitement and pageantry of drum and bugle corps competition. Palo Alto resident Robert Peele summed it up. “I was sort of dragged here by a friend. I thought it was just a fancy marching band. Now that I’ve seen it, I’ve become a fan.” While “fancy marching band” is somewhat correct, it doesn’t explain or capture the magnificence of the show, as all of the teams dazzled the crowd.

The competition featured two classes – World and Open. The major difference is the age of the corps members. According to the DCI, World Class corps are primarily made up of college students, however, there are also some high school students as well. Open Class corps consists primarily of high school students with some college students among their ranks. The other differences are the size of the corps and the level of commitment as “World Class corps can have up to 150 members…and they follow an intensive tour schedule, traveling more than 10,000 miles over the course of the summer while performing at more than 35 sanctioned events. Open Class corps must have a minimum of 30 up to a maximum of 150 members and they…follow an abbreviated tour schedule….”

Community
Author Giovanni Albanese Jr.Posted on February 29, 2012
Last Saturday, Santana Row hosted the third annual Wine and Dine Around, a benefit to raise awareness of the impact for heart disease and...

Community
Author Erika TownePosted on September 23, 2020
They say the show must go on. The City of Sunnyvale’s annual Celebrate Sunnyvale event was held virtually this year. It premiered on YouTube...
SPONSORED