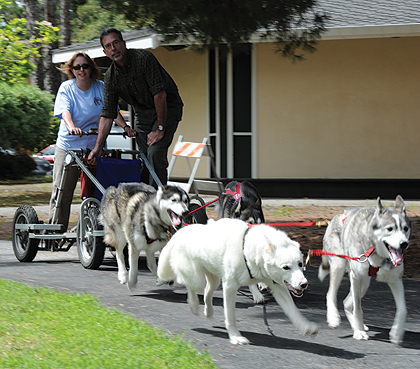 Depending on the listener’s point of view, the sounds emanating from the back parking lot of the Triton Museum on Saturday afternoon were either a pleasing melody, or a cacophony, of excited dogs impatiently waiting their chance to take center stage. The dogs and their handlers were the physical demonstration for a third event on Saturday, April 2 at the Triton Museum, all a part of The Big Read.

The day led off with “Family Day at the Triton” that included hands-on activities for children from the community as well as an art show of paintings, photographs and pieces of sculpture, all crafted from the hands of Santa Clara Unified School District students. Starting at 12noon, Canadian sled dog historian and sled dog driver, Jeff Dinsdale, gave a talk about “Sled Dogs on the Klondike Trail.” The standing-room only crowd for Jeff’s talk seemed enthralled by what they heard and that served as a terrific introduction to the dogs and their handlers. Melissa and Terry Beers along with Wilson, Quill, Abby and Dewey didn’t disappoint the crowd. Quill and Abby (both 11 years old) are the Beers’ Alaskan Huskies while Wilson (5 years old) and Dewey (7 years old) are their Siberian Huskies.

When asked about their decision to become sled dog drivers, Melissa explained her “…interest in Huskies was started by the 1961 Disney movie, Nikki, Wild Dog of the North. Terry was raised around Boxers but we decided to get a Husky. We started with one and like most Huskies, he was hyper. The suggested solution was to get a second Husky to keep the first company. What started as two dogs has blossomed into eight dogs” – all Huskies. Melissa continued, “A lot of what the dogs do is very instinctive, and we train them to follow commands. Since there aren’t reins to control the direction of the dogs like those used on a horse, the commands tell the dogs what to do or not to do – such as ‘don’t interact with other teams of dogs’ and ‘go past loose dogs.” When asked about detractors of the sport, Melissa responded, “These dogs are bred to run and just like in any sport, there are bad apples.” She estimated that “99% of the time sled dog owners spend more time with their dogs than most people. One of the things these demonstrations do is to show people the dogs are happy running and that they really enjoy what they do.”

Saturday’s weather was clear and sunny with no snow anywhere near Santa Clara. But the lack of snow didn’t stop the sled dog demonstration as the dogs easily pulled a four-wheeled sled with Melissa and Terry on-board around the Triton’s grounds, much to the delight of the assembled attendees. “That helped me understand what it was like on the Klondike Trail during the gold rush” remarked 8-year old Jessica. “Without the snow and the sub-zero temperatures” added a nearby spectator.

Events of the Big Read
The Big Read, a program of the National Endowment for the Arts, is designed with a simple purpose in mind – “to restore reading to the center of American culture.” Presented in partnership with the Institute of Museum and Library Services and in cooperation with Arts Midwest, “…the Big Read is designed to bring together partners across the country to encourage reading for pleasure and enlightenment.”

Many events of The Big Read have already taken place. The remaining events include:

Apr 13: Youth Book Discussion: “Sheep,” by Valerie Hobbs: In a companion book discussion to the Big Read’s Call of the Wild program series, children will discuss this novel written from the perspective of a stray border collie whose purposeful life of herding sheep abruptly ends when he is sold to a pet store. ‘Sheep’ is available through the Santa Clara City Library; children should read the novel prior to the program. For children in 3rd to 6th grades; please register by calling 408-615-2916- Central Park Library Redwood Room, 2635 Homestead Road, Santa Clara, CA, Wed, Apr 13, 4 – 5 pm.

Apr 16: Railroad Museum Program: After the dog, Buck, is kidnapped in Santa Clara, he is forced upon a train at the still extant College Park Station in San Jose near the Santa Clara border. Learn about the history of Santa Clara Valley railroading and how important railroads were in the era when “The Call of the Wild” was written. RSVP requested to 408.615.2900 – Santa Clara Railroad Depot, 1005 Railroad Ave, Santa Clara, 10 am – 12 pm.

Apr 19: Evolution of the New Park Estate where ‘The Call of the Wild’ opens: Honorary City Historian Lorie Garcia will bring historical maps and photos and talk about the evolution of the property, an estate called New Park, where the novel “The Call of the Wild’ opens. Before the Bond Family (or Miller family in the book) occupied it, it was owned by the Pierce Family, which ran the Pacific Manufacturing Company, the largest employer in Santa Clara. See how huge the estate was, how the roads ran then and where the railroad came in. See actual maps of Santa Clara from the actual time period when the novel was written – Central Park Library Cedar Room, 2635 Homestead Road, Santa Clara, 6 – 8 pm.

Community Sports
Author Erika TownePosted on June 30, 2022
On June 23, Jalen Williams did something that few Santa Clara University (SCU) athletes have ever done—he was drafted into the NBA. Williams was...
SPONSORED