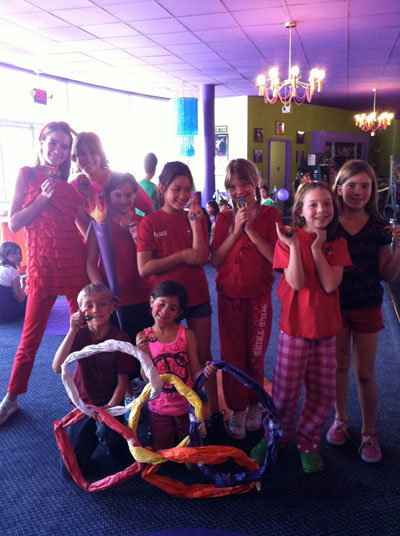 When choosing a performing arts summer camp to send their children to, many parents struggle with all of the available options. Some may be within the right price range, but the adults wonder just how much real experience from industry professionals their child will receive.

And this year a new arts group has found its way into the mix. Guggenheim Entertainment (the group that wrote, directed, stared in and produced Thanks for Playing the Game Show Show and The Meshuga Nutracker) is holding its intensive summer conservatory for musical theater at Santa Clara University.

“Originally I chose The Scene because I had heard good reviews from a large group of trusted neighbors,” says parent Soozee Shireman. “Then someone said the name Guggenheim and the light bulb ignited. I had worked with all three when I was working as a performing artist 20 years ago!

“Shannon and I were in a musical together, and before that Scott ran a regional theatre group that toured Bay Area schools and children’s homes,” she continued. “He hired me as an actress. Brother Stephen coached me on voice for those productions. So, when my neighbors told me that The Scene was run by this trio, I had to give my kids the experience.”

“We had two daughters, Trinity and Malina, attend The Scene last summer,” says Mija Brush. “They not only learned what goes into putting on a live performance but also workshops covering different aspects of acting. Aside from the live performances, the girls enjoyed learning how to throw [and] take a fake punch. They would come home and perform the ‘stunts’ they learned for family and friends, who were impressed with how realistic it was. They also learned teamwork, how to audition, miming – another form of acting – and also built self-confidents being in front of an audience.”

After lunch, a guest artist speaks to the group. Each day ends at 3:30 p.m. Conservatory PLUS students attend the same Monday through Friday schedule as Conservatory Basic, but on Saturdays they receive individualized training in the morning and recital rehearsals in the afternoon.

“I personally like The Scene better than the rest because of the staff and how they interact with the kids,” says parent Olivia Goes. “I’ve seen The Scene staff treat the kids with such high regard with what they can do on stage with singing and the acting. They personally take time to teach the kids about theater, they give one-on-one feedback, [and] they treat you like family.”

For more information on The Scene, to learn about faculty members or to register, visit www.thescene.theretrodome.com.