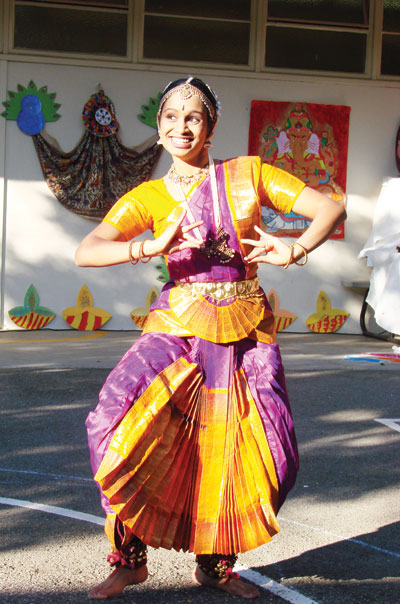 A young boy, dressed in a long tan jacket embellished with designs down the front and around the cuffs, hands out taped boxes of trail mix with Happy Diwali printed on one side and photos printed on the others.

Students take their seats surrounding the modest asphalt stage and parents find a spot among the metal chairs set up in front of the performance area. A shrine is lit to open the celebration of the “Festival of Lights” and the music begins.

Srinivas Saripalle starts playing the drums while Simha Sadasiva and Vivek Sundararaman provide vocals for the Carnatic (South Indian) and Hindustani (North Indian) music. Swasti Pandey accompanies the voices and drums with sounds from a harmonium.

Despite many of the audience members being unable to understand the words in the music, it’s easy to get wrapped up in the melodious sounds filling the performance space. It’s relaxing and beautiful.

The tone has been set for Delphi Academy’s annual Diwali Festival. For the last six years, students, teachers and parents have come together to teach not only the students but the families and staff about the Indian culture and Diwali, a popular festival celebrated every year with the lighting of lamps and cleaning of the home to make the goddess Lakshmi feel welcome.

Beginner 1, students aged 4-5, begin the student performance portion of the festival, with “The Jungle Book” dance. Each student wears traditional Indian clothing with the boys donning animal-themed masks and the girls red butterfly wings. The dance, which was taught by Vivitha Venugopal, Bhuvana Vivek, Purvi Talati, Mala Lyer, and Neelima Goshike, was for Hanuman, a symbol of physical strength, perseverance and devotion in the Hindu religion.

Next, Beginner 2, students aged 5-6, perform a South Indian folk dance related to farming from the Kerala region of India. Beginner 2 teacher, Tim Raiburn, was quick to point out that the performance suffered a wardrobe change and complete overhaul in the previous 48 hours, but it wasn’t obvious based on the performance.

Bollywood pays a visit to Delphi when Form 1, students aged 6-7, perform a folk and Bollywood fusion dance taught by Sona Sharma and Meera Shankar. Those mildly familiar with Indian music and dance were able to best relate to this performance, as it was upbeat and energetic.

The Form 2 class, students aged 7-8, perform a skit and poem taught by Rama Saripalle, Shree Krishnamurthy and Rebecca Biswas. “How We Celebrate Diwali” went deeper into the festival, why it’s celebrated, and how it is celebrated in various homes. An emphasis was placed on the sweets eaten, which is understandable given the age group of the children involved.

Form 3, students aged 8-10, perform a sports-themed dance taught by Neelima Goshike and Mala Iyer to the song Chak De! India, which is the country’s unofficial sports anthem. The Form 3 boys paid homage to the popular Indian sport of cricket, while the Form 3 girls celebrated India’s love of field hockey.

Students aged 10-13, those in Form 4 and Form 5, perform the final student performance of the afternoon with a Bengali folk dance taught by Pinki Sinha and Form 5 teacher, Nivedita Kumar called “The Drums are Being Played.” The boys pound on prop drums while the girls dance with ribbons and plates to celebrate the beginning of a new year.

The final performance was a classical Indian dance by Madhumita Govindaswamy, the elder sister of Beginner 2 student, Varsha Govindaswarmy. The dance, done in the Bharata Natyam style, was to the song Bho Shambho and was done in praise of Lord Shiva.

As soon as Govindaswarmy complets her dance, students, parents, faculty and attendees are instructed to form a “train” around the backside of the building to the table of sweets and other goodies but not before the Chai Walla (bicycle tea seller) makes an appearance to an adorable Karadi Rhymes song called Train.

When Delphi first began celebrating the Festival of Lights, it was a small production. But, as more families have signed on to help and more people have become interested in being part of the event, it’s grown. “Parents helped coordinate and helped prepare for the festivities by teaching the kids a dance or skit,” says Kumar, the event’s organizer. “They help with food and decorations too. All the parents come together and make it happen.”

“We want the kids to get exposed to cultures and ethnicities and nowhere else do they celebrate this way and this much.”

Additional information on Delphi Academy can be found at www.delphisantaclara.org.

Arts Conference for Educators on November 19

Schools
Author Alissa SorotenPosted on May 13, 2022
The Santa Clara Unified School District Board of Trustees spent a big part of the meeting in Closed Session but also made a major...
SPONSORED