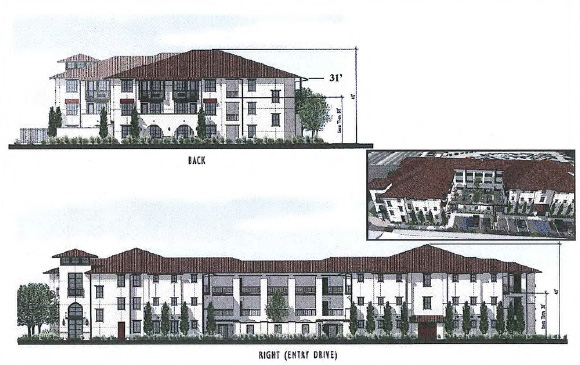 During elections we love to toss around hot air-filled slogans like “affordable housing,” “green building,” and “transit-oriented development.” But few of us step up to the homework of making campaign slogans reality.

Last Tuesday, the Santa Clara City Council and City Staff offered a lesson in doing that demanding homework with an hour-plus long discussion on a planned residential development at 2525 El Camino Real. Currently, there’s a fast food restaurant on the site.

A development targeting low-income seniors (up to 60 percent of area median income), the three-story 2525 El Camino project will have 48 one-bedroom apartments. The developer, Santa Clara-based ROEM (www.roemcorp.com), has built many multi-unit projects in the South Bay, including Heritage Place in Campbell and Oaks of Almaden in San Jose. The company manages most of the projects it builds.

The biggest subject of discussion was parking. The project is designed with slightly less than one parking space per unit (0.7) – lower than the standard required for market rate apartments – for several reasons.

First, the development will be on what is probably the best-served public transit artery in the South Bay – El Camino (which is also designed by Santa Clara’s 2010 General Plan as a location for higher density, transit-oriented development) – and designed for people who want that convenience.

“If we continue to build projects that allow units to have two cars per unit, we’ll continue to have more traffic,” observed Planning Director Kevin Riley, who can be said to be in the position of having listened to what people said they wanted for the City’s future and was now being questioned for having acted on the basis of that input. “It all comes down to what we’re trying to achieve.”

Second, the development’s prospective residents are those – people 55 and older with low incomes – who can be reasonably expected to have fewer cars.

Most of ROEM’s similar developments have even fewer parking spaces per unit, explained a company spokesman, and “we absolutely do not have parking problems. There’s a wait list for [residential] projects of this nature of over 50,000 individuals – it’s not hard to target the population that wants to use public transportation.”

In fact, the encouragement to use public transit isn’t just passive. Ongoing money is allocated for providing transit information and passes.

Santa Clara resident Kevin Park pointed out that the 2525 El Camino project differs from other ROEM projects in that the site has no on-street parking.

Even with the parking question put to bed – at least for the time being – critics of the project were vehement in their opposition.

“Business is what makes America great,” said Lorraine Kelly, part owner of the Granada Inn (2515 El Camino) who drove from her San Francisco home to voice her opposition to the project. “Do we need three …low, low cost housing [developments] on El Camino?” (Kelly didn’t explain her objections – whether senior citizens would drive down real estate values, drive away with hotel traffic, or mar the historic charm of the El Camino Real between Lawrence and San Tomas Expressways.)

“I have nothing against senior housing,” Santa Clara resident Rosemary Grow told the Council. “It’s just in the wrong place.” Saying that the transit-oriented development would add car traffic to the already-congested intersection at El Camino and San Tomas Expressway, Grow objected that “The traffic [is] going to be going down my street avoiding El Camino.”

Santa Clara resident Louis Rubalcavo was more specific in his objections. “I’m deadly opposed to this project…many people 55 years and older have children and need cars to take them to school,” he said. “No matter what they state on their forms…these people [HUD Section 8 housing voucher holders], the agreements they make, they break them all the time.” As the 2525 El Camino project isn’t Section 8 housing, the relevance of this observation was unclear.

The City Council appeared unmoved by the threat to public safety and order posed by the future residents of 2525 El Camino, voting unanimously to approve the zoning change (commercial to mixed use) that will permit the project to go forward.

“As we’ve heard there’s a great unmet need for senior housing in this income range -over 50,000 people that are on the waiting list,” remarked Mayor Jamie Matthews, who then delivered a comment of unusual length for Matthews, who often speaks at the machine gun pace of a 15-second TV ad pitch.

“The fact is we have developments in the city that have lower [parking] ratios and they work fine. On the El Camino, the 22 and 522 [buses] have the most frequent service in the VTA…[and] nearby services include pharmacy, grocery. The reality of it is that seniors don’t want to leave [the city].

“One of the best ways to free up market rate housing – which we don’t have room to build – is to build senior housing so people can stay in the area they’ve grown up in and have community support and family in. [This also works towards] beautifying the El Camino, which has been a long-standing goal. We may lose a few auto body shops,” Matthews concluded, “but we’ll gain a beautiful project on the El Camino.”

City Politics
Author Carolyn SchukPosted on June 15, 2011
A year ago Santa Clara residents voted “yes” on a proposal to move forward with a plan for a 49ers football stadium in Santa...

City Politics
Author Erika TownePosted on March 25, 2020April 10, 2020
Santa Clara’s Convention Center is being transformed into a temporary Federal Medical Station. Over the weekend, the City of Santa Clara agreed to partner...