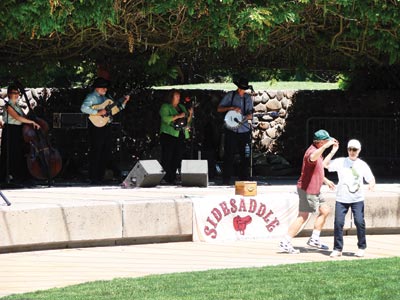 A couple dance to the Bluegrass beats of Sidesaddle ” Co. as the City of Santa Clara’s Cultural Advisory Commission celebrated the fifth week of the Concerts in the Park series on Sunday, July 24. Sidesaddle ” Co. played for an hour and a half, only stopping briefly to encourage people to sign up for their e-mail list and sell CDs. Upon returning, they welcomed a spoon player to the stage and Sidesaddle ” Co asked for concert-goers to participate in a dance contest. The winner, who received a Sidesaddle CD as a prize, happened to be dancing in heels and barely beat out a young man doing Riverdance-like moves while playing an air guitar.

Next up, the sounds of the Caribbean will captivate Central Park when the Shebang Steel Drum Band performs on Sunday, July 31st at 2:30 p.m.