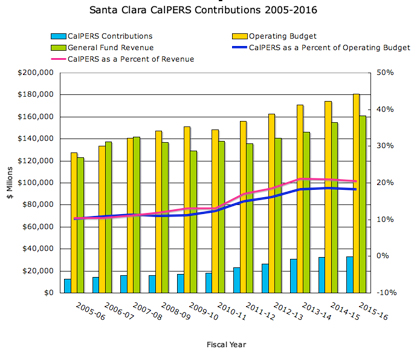 Santa Clara’s operating budget picture is somewhat brighter this year, City Finance Director Gary Ameling told the City Council at the May 17 meeting, but Santa Clara isn’t out of the financial woods yet.

The city finance department projects a $3.2 million operating budget surplus for the coming fiscal year – principally as a result of city employee pay freezes and furloughs, and eliminating about 100 jobs.

But the respite will be short. Without “better than expected revenues,” Ameling’s forecast shows deficits returning in 2013 – driven mainly by growing retirement costs and, to a lesser degree, salary increases.

In the coming year, Santa Clara’s contribution to the state retirement program, CalPERS, will rise “dramatically,” Ameling said. This is due to CalPERS’ “phase-in” of 2008-2009 investment losses (about 30 percent) and updated “experience” tables that reflect retirees living longer, retiring younger and earning higher salaries.

Santa Clara budget information is available on the city’s website at santaclaraca.gov/index.aspx?page=50&recordid=560, and at the Central Library.